Side Effects of Kissing Too Much

The question almost seems unfair, but can too much kissing damage our lips? Overall, passionate kissing is known to have a number of health benefits, including forming strong emotional bonds, boosting in your metabolic rate (what a great way to lose weight!), and reducing measurable amounts of stress [source: Victoria]. How can something so enjoyable be a bad thing?

The fact is, most of us have developed a particularly fondness for kissing. To explain it scientifically, during a kiss the brain produces the chemical oxytocin, a calming hormone which has been shown to establish bonds in humans. That prompts the limbic system's reward center to release the chemical dopamine, resulting in the pleasurable feelings we experience during kissing. In short, we get the same reaction from kissing that we might from chocolate and cocaine (but without the added calories or addiction risks) [source: Ahlstrom].

Kissing also serves as an emotional cue. It conveys affection, attraction and maybe even love. But it can be dangerous. The herpes simplex virus 1 (HSV1), which causes cold sores, can be transmitted during a kiss. The same goes for syphilis. Then there is mononucleosis and glandular fever (the so-called "kissing diseases"), as well as the common cold, the flu and myriad other diseases that can also be transferred during a good smooch. All totaled, the average open-mouthed kiss can transfer around 250 colonies of bacteria [source: Harrison].

So how can it damage our lips? The mouth contains bacteria and saliva which, while relatively harmless, can actually harm the thin skin of our lips. While the rest of the skin across our body has about 16 layers, our lips are thinner, with about three to five layers. In reality, the skin on our lips is so thin that it gets its color from the blood-filled capillaries in the mucous membrane beneath.

Likewise, our lips also have the additional misfortune of being located around the mouth. Saliva is produced inside our mouths, and saliva is laden with digestive enzymes that jump-start the food digestion process. A pair of these enzymes -- amylase and maltase -- can deteriorate the thin skin of the lips every time we lick them with our tongues [source: Gardner].

Saliva is also introduced to the lips during kissing. We often prepare for a kiss by wetting our lips with our tongues. Even a brief peck transmits saliva from within the mouth to the outer lips. And saliva is transferred more abundantly during passionate or open-mouthed kissing. All of this can lead to some measurable, though minor, damage. Conversely, some researchers feel this saliva exchange can also strengthen our immune systems [source: Victoria].

While saliva can damage the lips, it also plays an important role in kissing. It contains several hormones that are transferred from kisser to kisser, one of which is testosterone. This hormone has been shown to increase sexual desire and physical sensitivity in both men and women [source: Blackwell Publishing]. That fact alone can make kissing an acceptable risk, even if it might slightly harm our lips. However, all that extra saliva can also help wash away bacteria and break down oral plaque [source: Lerche Davis]. 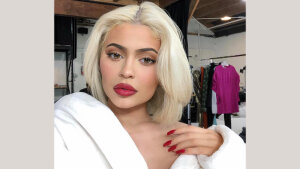 What's Up With the Millennial Pout? 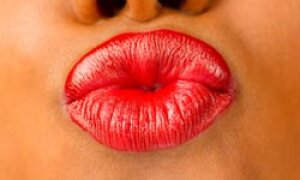