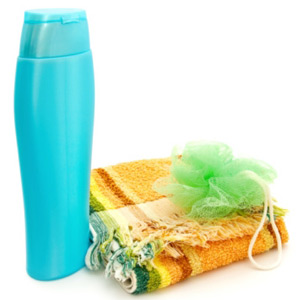 Sure, your deodorizing body wash gets you clean. But does it really remove odor, or just cover it up with strong fragrance? See more personal hygiene pictures.
Hemera/Thinkstock

The human body has about 3 million sweat glands. Walking down some aisles in our nation's drugstores or supermarkets, you might think that there are also about 3 million products to help wash sweat away and make us smell like mountain streams, spring meadows or glaciers (whatever they smell like). With so many choices, the question emerges almost as quickly as lather on a bath puff: Is one soap really better than another? And, more specifically, do body washes marketed as deodorizing remove body odor, or do they simply layer perfume on top of the stench?

To answer this question, it's first helpful to understand that deodorizers work by adsorbing odor molecules -- by dissolving or emulsifying them -- or by killing the bacteria at the root of the odor. And, no, that's not a typo. Adsorbing is the process by which molecules adhere to the surface of another item -- this is the way that activated charcoal works. This is different from absorption, in which the molecules fill in the pores of another item.

Both adsorption and bacterial death help you smell better, but whether your body wash does these is another question entirely. Before we can determine if body washes are really deodorizing, it's useful to understand how both body odor and soap work. So check out the next page, where body odor is a tag-team sport with sweat and bacteria working together to help us vie for whiffy trophies!

It's All in the Marketing

The human body produces two types of sweat: eccrine and apocrine. Both are odorless in and of themselves. However, when bacteria arrive, they begin to eat the sweat, and the gases they produce emanate from our skin as body odor. Apocrine sweat, which is more oily than eccrine, is produced in areas that aren't normally exposed to air, such as the armpits, groin and feet. Bacteria tend to enjoy feasting on this sweat the most. Unfortunately, the gases they produce are particularly pungent.

Soap molecules have two ends: one that likes to bind with water molecules and one that likes to bond with oil molecules. Because grease gets stubborn in water and refuses to bond with the H2O molecules, it takes soap to act as an intermediary. It does this by surrounding the grease on our bodies with its oil-loving side while bonding to water with its hydrophilic (water-loving) side. This forms an emulsion of grease in water, which can then be washed away. If you'll remember, one of the definitions of a deodorizer is something that can emulsify molecules, which is exactly what soap does.

If sweat is the basis for bacteria to form body odor, and soap removes sweat from our bodies, then it follows that all soap is deodorizing soap. Therefore, deodorizing body washes do in fact remove odors, and don't just cover them up.

So it would seem that "deodorizing" is simply a marketing term that states the obvious (like a moisturizing cream that's touted to fight elbow dryness or a toothpaste that claims it can clean hard-to-reach areas). However, some body washes may contain stronger fragrances than regular soaps. Once they remove the sweat -- and the odor -- from our skin, they leave behind a perfume that could help cover up new odors. If that's your goal, it's best to experiment with a variety of washes to find the one with a fragrance that best suits your skin chemistry and olfactory aesthetics.

Some body washes claim to fight odors better because they contain an antibacterial agent such as triclosan, but the FDA states that it "does not have evidence that triclosan in antibacterial soaps and body washes provides any benefit over washing with regular soap and water."

Does shaving really make hair grow back thicker?
Can You Get Lice in Your Beard?
Are electric shavers better for sensitive skin?