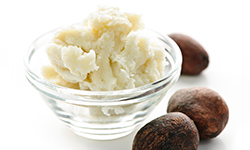 Shea butter can be a good moisturizer, when used on the body.
iStock/Thinkstock

When the weather outside is frightful, your skin is usually anything but delightful. In fact, it may be as dry as the air outside. And no one wants to experience a parched, flaky complexion that feels tight or itchy. While you may be tempted to slather on a heavy-duty moisturizer like natural shea butter, dermatologists warn that this cream isn't the best option.

Shea butter, which is extracted from the nut of the African shea tree, is a rich, cream-colored substance that has natural soothing and moisturizing properties. "The moisturizers present in shea butter are some of the same moisturizers that the sebaceous glands produce," says Jody Levine, M.D., clinical instructor of dermatology at Mount Sinai School of Medicine in New York City.

Shea butter is full of nutrients, including vitamin A, which has many healing properties and has been known to aid in treating blemishes, wrinkles, eczema and dermatitis, as well as burns and even stretch marks. Shea butter is also packed with antioxidants like vitamin E , as well as polyphenols and phytonutrients. These ingredients make shea butter an anti-inflammatory, which is why it works so well at moisturizing and soothing all types of skin (and can be found in skin and hair products galore).

And while pure shea butter is great for hydrating most of your skin (it's commonly used in body moisturizing creams), it should not be used on the face. "It's very rich and can make some people break out," explains Joshua Zeichner, M.D., director of cosmetic and clinical research at Mount Sinai Medical Center in New York City.

Instead of using the pure kind (usually labeled Class A), look for moisturizers that contain shea butter, like L'Occitane Ultra Rich Face Cream with Shea Butter, as well as several other moisturizing ingredients like glycerin. In general, it's a good idea to only use products targeted at facial skin on your face, as they are typically noncomedogenic, meaning they won't clog pores.

Mattifying Lotions
What is an emollient?
Salicylic Acid Lotion