How fast do nails grow? 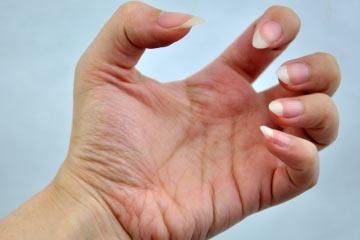 A broken fingernail can seem to take forever to grow out if you're an adult. Children and young teens are the ones who get a lucky break -- their nails heal and grow back much faster. In fact, many parents can attest to cutting a squirming child's nails almost every other day. When it comes to nail growth, age and health play an important role.

Nails are made of a protein called keratin, and their growth is affected by several different factors, including age and health. Children's nails grow quickly until puberty, when growth slows to 50 percent of its previous rate [source: Robb-Nicholson]. Pregnant women also experience accelerated nail growth -- hormones boost metabolism and increase circulation, which causes nails and hair to grow more quickly. On the other hand, illnesses and certain drugs, such as chemotherapy, can slow nail growth or even cause nails to fall off [source: Murkoff].

Fingernails grow about three to four times faster than toenails. The nails on your dominant hand grow faster than those on your other hand, and nails grow faster on your longest fingers as well. Fingernails also grow more quickly in the summer than in the winter -- scientists aren't sure why, but one theory is that nails that are used more often and exposed to the elements grow faster [source: Binghamton University].

So how fast do the average adult's nails grow? The simple answer is that fingernails grow about one-tenth of an inch (3 millimeters) a month. If you lose a fingernail, it will take four to six months to regrow completely. Toenails take a year to a year and a half to grow from cuticle to tip [source: Robb-Nicholson]. If you notice a change in your nails or their growth rate, see your doctor.

For more information on nails and how they grow, see the links on the following page.

Is the sun bad for my nails?
Cuticle Care 101
How often should I file my nails?

Lasting Color? No-Chip Polish Examined
How to Use Nail Stencils
What are the white marks on my nails?