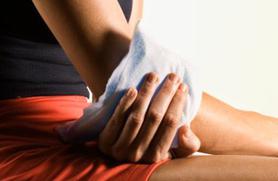 Nobody likes going around with a bruise. People see a bruise, and they think you're living in an after-school special or you're a complete klutz. Both are bad, but luckily for you and your black-and-blue body, there are the plenty of all-natural ways to rid yourself of bruises faster. That way you wont have to cover those bruises with ecologically questionable cosmetics.

Ice cubes in a simple cloth can reduce the swelling. Reducing the swelling reduces the unsightly long-term effects of the bruise. Apply ice immediately. Hold for thirty minutes.

Derived from the plant known as wolf's bane, this gel is a favorite among athletes. Use as directed.

This is kind of a preventative tip, but if your body is busy trying to digest burgers and shakes, it's not going to spend a lot of time healing bruises. Eat less meat. Eat more fruits and vegetables and your body will become a bruise-healing machine.

Your bruise might smart something fierce. You might reach for an aspirin. Don't. Aspirin is an anticoagulant. This will cause the blood to spread throughout the damaged area faster, increasing the size of the bruise.

5. Elevate Your Bruise You can decrease the size of your bruise by elevating it. 6. Heat After the initial swelling has gone down. Apply a heated compress to your bruise. The heat will open the capillaries and increase immune system response. 7. Clean the Bruise Cleaning the bruised area can prevent infection. If your body is fighting off germs, it won`t have the resources to heal the bruise. The quicker you clean the bruise the better. 8. Brian Gray's Bruise Remover Brian Gray is a Master of the Iron Palm. His company claims that his bruise remover has been used for centuries in China. It is supposedly popular with students of Kung-Fu. 9. Aloe Vera Aloe Vera has some restorative qualities. People often use it on bruises. I was unable to find anything concrete. Most seem to think it benefits the immune system, but there is some controversy on it's exact benefits. Still, they use it to fight cancer in dogs and cats. And it should help to clean the bruise if applied immediately. 10. Lower Your Blood Pressure Another preventative tip. People with lower blood pressures bruise less. Diet and exercise can achieve this.

Jaundice Overview
Scabies Overview
Is it safe to lance a blister?