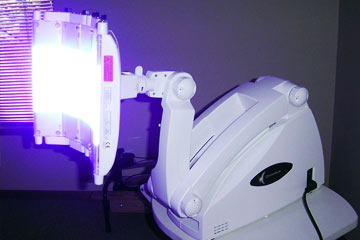 If you think you're alone in your skin troubles, consider this: Approximately 80 percent of people in the world deal with acne at some point [source: Kansas City Skin Care Center]. It's caused by an excess of oil, or sebum, that's produced by the glands that surround hair follicles. When too much sebum and skin cells clog the follicles, they become irritated and inflamed, resulting in those dreaded bumps -- pimples, whiteheads, blackheads and other lesions. For this reason, acne is more common among people who have oily skin, but it can affect people of all skin types. There are a number of treatments for acne -- one of the newer ones is Blu-U.

Blu-U works to treat acne through blue-light therapy. The high intensity blue light -- combined with the topical solution called Levulan Kerastick that's applied to your face before treatment -- kills the bacteria Propionibacterium (P. acnes). Left untreated, this bacteria can worsen acne by causing additional inflammation and allowing it to spread [source: DUSA Pharmaceuticals, Inc.]. A Blu-U procedure only takes about 15 minutes and is not painful. There are minimal side effects, but one downside is that you'll have to continue getting the treatments if you want acne to stay away. Blu-U is not always a sure thing: It has proven effective in many cases but not all.

Originally, light treatments for acne contained ultraviolet, or UV, light. However, UV light is no longer used because of the adverse effects it is now known to have on your skin. The Food and Drug Administration (FDA) approved blue-light therapy for treating acne, but there haven't been many intense, clinical trials done on Blu-U yet, so the long-term effects of the treatment are not yet known [source: AcneNet].

If you've tried everything else to get rid of acne, and blue light therapy sounds like a good option so far, read on to the following page to learn about how much it will cost you.

Blu-U treatments aren't cheap by any means. Probably the biggest expense is not the individual cost per session, but the number of sessions you'll need to combat your acne. Unfortunately, Blu-U is not a quick fix. Over four weeks, you'll probably have six to eight sessions that last approximately 15 minutes each. Each session involves application of the topical solution, followed by close exposure to the light. If you're claustrophobic, be aware that the device with the light beams is placed about two to four inches from your face [source: DUSA Pharmaceuticals, Inc.].

The cost of Blu-U treatment can range from about $40 per session to double, triple or quadruple that amount [source: Kansas City Skin Care Center]. This can add up to be in the thousand-dollar range for eight sessions. Of course, the cost per session all depends on your dermatologist or treatment center and the number of sessions you need. Be sure to check with your insurance company to see if it will cover at least part of the cost of your treatments. Plan to fund most or all of it on your own, though, since Blu-U is a relatively new procedure.

Blu-U is fairly expensive, but does it pay off? Read on to learn about the effectiveness and possible side effects of blue-light therapy.

Other Light and Laser Treatments

Blue-light therapy is not your only choice -- other light and laser treatments for acne are available, and along with Blue-U, they are a relatively recent phenomenon. One option is pulsed light and heat therapy, which reduces the size of the sebaceous glands (the glands that produce sebum) and destroys P. acnes. Another is the use of diode lasers, which target the sebaceous glands in the middle layer of skin without harming the top layer. While light therapy is usually painless, lasers may not be, and, like Blu-U, both of these options can be pretty costly [source: MayoClinic]. If you're on a tight budget, you may want to look into chemical peels, microdermabrasion, oral and topical antibiotics or topical creams to help treat your acne.

Laser and light therapies seem like great steps forward in the field of acne treatment -- when they actually work, that is. Each Blu-U treatment is pretty simple: The topical solution that the dermatologist puts on your face before applying the blue-light therapy is Levulan Kerastick. The doctor then uses a Blu-U device to emit specific wavelengths of light that cause a reaction with the photosensitive topical treatment and kill the bacteria in the acne lesions.

The results that people get using Blu-U vary. In one set of recent studies, 80 percent of patients responded positively to the treatment, but the 20 percent who did not respond positively didn't see any results. Some even said that their acne was worse as a result of the treatment [source: AcneNet].

Even for those who see positive results, the degree to which acne clears varies from person to person. In the same set of studies, the average was about a 55 percent clearance, although some patients experienced almost total clearance, and others saw minimal results [source: AcneNet]. If you've had severe acne problems, getting rid of more than half of it may be worth the cost of Blu-U, but if you're looking for complete clearance, keep in mind that this procedure may not be the answer. Blu-U helps to control acne, but in most cases does not eliminate it completely.

You may be ready try Blu-U for its acne-clearing effects, but keep in mind that a few side effects may also come as part of the package. Read on to find out how to watch out for those unwelcome occurrences.

Levulan Kerastick is made of aminolevulinic acid and should only be applied directly to acne lesions that you have on your face or your scalp [source: Alai]. Because it's photosensitive and is meant to react with the blue light, it will react on other parts of your skin if it gets on them accidentally. After using Levulan Kerastick, be sure to limit your sun exposure, as your skin is much more sensitive to the sun after being treated with the solution.

You've already learned the not-so-good news: The long-term effects of Blu-U aren't yet known. However, it seems that the side effects of the treatment are minimal and not very damaging. The light therapy does not go deep enough into your skin to affect the normal tissue -- only the acne lesions it's targeting. The treatment itself isn't painful, although it could be slightly uncomfortable to have your face in a chin rest for 15 minutes.

The reported side effects of Blu-U are usually mild and include redness or other temporary pigment changes, swelling of the treated areas and dryness. These symptoms should go away a few hours after the treatment is complete, so talk to your dermatologist if your skin is still red or dry after a few days.

The facts on Blu-U are that it's relatively expensive, semi-effective and has minimal side effects. Knowing what it's all about before you sign up for a treatment is the best way to prepare your skin, mind and pocketbook for Blu-U. If you're still not sure this procedure is right for you, or you'd just like to find out more information about getting better skin, follow the links on the next page.

Some experts have found that Blu-U can be helpful in eliminating actinic keratoses, a skin problem that results in scaly, dry patches of skin that range in size from a pinhead to a quarter. The condition results from sun exposure and can become cancerous in many cases. Recent studies have shown that treating actinic keratoses with blue-light therapy helps reduce the number of pre-cancer cells [source: University of Iowa Hospitals and Clinics].

Can yoga clear up acne?
Milia Overview
Are chicken pox and shingles the same thing?