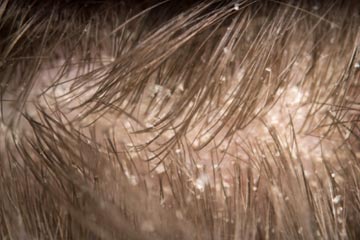 We know it's tempting, but your scalp will heal faster if you avoid scratching.
Hemera/Thinkstock

Your body has an amazing ability to rejuvenate itself. The suit of skin you're wearing now won't be the same one you're wearing a month from now. But the problem is, the skin that is flaking off your head has become itchy and unsightly -- you have dandruff.

Dandruff is caused by a microscopic, yeast-like fungus called malassezia. Malassezia is also found on healthy human heads but, for some unknown reason, it gets out of control on the scalps of an unlucky group of people. The cell turnover that would take 27 or 28 days on a healthy head, takes two weeks or less on the skin of someone with dandruff. Those dead cells tend to clump together and then -- because of natural oils -- stick on your head and clothing, refusing to harmlessly drift away. That's the science of the matter; below are some solutions.

Dandruff is an itchy, unsightly and stubborn problem -- but hang in there. You can get back to a scratch-free and pleasant existence.

How often should you wash your hair?
Dandruff Causes and Treatments
At a Glance: Scalp Fungus