The Lean, Green Supermodel Diet Anyone Can Do 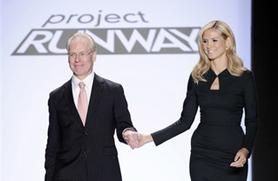 How do supermodels stay so thin?
AP Photo/Richard Drew

It makes sense though right? Eating clean green food keeps junk like chemicals and toxins out of the body which helps to maintain that must-have gorgeous complexion and mandatory svelte physique. Models are paid to be beautiful. So, why not take a nod from their diets and green yours too?

Andrea Orbeck, who is pretty much the go-to personal trainer to for a slew of Victoria's Secret models (including Heidi Klum and Karolina Kurkova), not only helps her clients out when it comes to exercise, but she has a serious say in their diets too.

Models and celebrities are known for their bodies, their skin tone and their beautiful complexion. While genetics undeniably plays a role, their appearance has much to do with their nutritional regimen.

Muscle tone and shape, skin quality, intestinal function and energy levels all require ingredients that provide more healthy opportunities to thrive and compliment a fitness routine that focuses on fat loss, muscle shape and mental wellness. That's why Andrea puts all of her models and clients on green and organic diets.

On the next page, discover why supermodels eat organic.

Why is organic protein better?

Organic sources are better for your health, the environment and the earth in general. Compared to mass-produced and drug injected sources, organic protein sources offer more "good" fats, and fewer "bad" fats. They are richer in antioxidants; including vitamins E, beta-carotene, and Vitamin C. Organic protein has also been found to be leaner.

Want proof? A 6-ounce steak from a grass-finished steer can have 100 fewer calories than a 6-ounce steak from a grain-fed steer. If you eat a typical amount of beef (66.5 pounds a year), switching to lean grass-fed beef will save you 17,733 calories a year--without requiring any willpower or change in your eating habits. Now that's a supermodel attitude!

The body needs a certain amount of carbohydrates to function properly. A deficient intake may cause fatigue, muscle cramps, and poor mental function. Not good when sauntering down a runway in 5-inch heels.

Over-consumption. Poor carb choices and ridiculous portion size has lead to the war against carbs. In moderation and from green and organic sources, carbs will provide you will steady energy, while filling your body up with natural fiber and essential vitamins. Healthy carbs include: 10-grain, pumpernickel, rye, sourdough, whole grain tortillas, even flax seed tortillas, bran cereals, oatmeal (slow cook, not instant- which is often stripped of its fiber for faster cooking), brown rice, beans, even high-fiber veggies and fruits like: beets, sweet potatoes, yams, broccoli, brussel sprouts, berries, apples, mangoes, and watermelon.

Fat: So where do you find these fabulous Omega-3s?

Omega-3s are most abundant in seafood- and certain nuts and seeds such as flaxseeds and walnuts, but they are also found in animals raised on pasture. The reason is simple. Omega-3s are formed in the chloroplasts of green leaves and algae. Sixty percent of the fatty acids in grass are omega-3s. When cattle are taken off omega-3 rich grass and shipped to a feedlot to be fattened on omega-3 poor grain, they begin losing their store of this beneficial fat. Each day that an animal spends in the feedlot, its supply of omega-3s is diminished.

- Canned Foods contain lots of salt (were talking most canned soups, canned ravioli and other foods that resemble and smell like dog food, and even canned veggies! Look at the "sodium" content in the nutritional facts to figure out how high your favorites rate.

- White Breads and Pastas are often made from refined white flour, which pale in comparison to whole wheat.

- White Rice, is a whole grain that has been stripped of the nutritionally-viable components like vitamins, nutrients and bran (fiber).

- Packaged High-Calorie Snack Foods, like chips and cheese snacks may be convenient, but they are also high-fat, sugar, and carbs. Oh, and they tend to totally lack any nutritional components so why waste the calories?

- Frozen Dinners, even lots of the "healthier options" tend to contain loads of sodium, carbs, sugars, and chemicals. Again, check the box.

- Boxed and bagged Meal Mixes can be alluring thanks to their easy prep, but aside from the fact that they are frozen and generally not organic, the sauces can be loaded with fat, salt, sugar, and chemicals. Don't be fooled!

- Processed Meats!! Ugh! Salt, chemicals, you don't even want to know what else often lurks in the easy-prep lunch meats.

The Keto Craze: Does the Diet Live Up to the Hype?
Working Out Mad Can Cause Some Serious Heart Problems
LA Weight Loss: What You Need to Know