Would Exercise Work Better if We Did It Naked?

by Laurie L. Dove Dec 26, 2017
Sandy bottoms aside, would the human body exercise more efficiently without the hindrance of clothing? David Turnley/Corbis/VCG/Getty Images

The ancient Greeks found nudity both practical and pleasant, and wore draped garments that could be thrown off within seconds if the need arose. They found that training for athletics while in the buff had its share of benefits, but historical evidence also suggests that students attended lectures without wearing a stitch. A lack of clothing was so commonplace, in fact, that it became part of the Olympic Games' tradition.

The earliest form of the Olympics date back to 1100 B.C.E, and by the seventh century B.C.E., reports show up of Spartans discarding their clothing during competition. When they weren't restricted by clothing, the nude athletes won such a high proportion of contests that other competitors began copying their birthday-suit style. From then on, nudity became part and parcel of the Olympic tradition — until the games were banned by Christian emperor Theodosius in 393 C.E. for embracing polytheism.

The circa-1860 oil painting "Young Spartans Exercising" is an early work by French impressionist artist Edgar Degas; historians have debated whether it actually depicts Spartans, or exercise.
Print Collector/Getty Images

When the Olympic Games were revived 1,500 years later in 1896, nudity was no longer in fashion. From the Olympic Games to professional baseball, playing naked is not the norm. But what if it were? Are there benefits we're missing out on because we wear clothes when we exercise or engage in sports?

"Technology has really pushed the whole industry to come out with products really optimized for its purpose—working out, running, biking, whatever it might be," Bjorn Bengtsson, a fashion marketing professor at Parsons School of Design in New York, told Men's Health in a January 2017 interview. "It's not just about going to the gym anymore."

So with the increasingly ubiquitous nature of workout clothes, whether worn while working out or while simply engaging in "athleisure," ditching the duds altogether bares examination, right?

Better to Bare It All?

Do clothes make us overheat? Constrain us? Or perhaps they simply hide the very thing we are exercising to improve: our bodies. Would it be better if we could see our muscles more clearly while exercising?

Without a doubt, argues Robert Herbst, a personal trainer, coach and professional powerlifter. Based in New York state, Herbst is an 18-time World Champion, 33-time National Champion and a member of the AAU Strength Sports Hall of Fame.

"Clothing can hinder performance if it causes a person to overheat," he says, "if it is so tight that it inhibits range of motion or restricts blood flow, or if it is so loose that it gets in the way of or catches on equipment."

For example, says Herbst, an athlete wouldn't want to wear baggy pants when deadlifting as the friction of the bars rubbing against the legs would slow the bar and make the lift harder.

"For skin health, one does not want clothing that will chafe or irritate, or allow sweat to pool where fungus or bacteria can grow," he says.

If clothing is known to restrict movement, it is also true that not wearing it can make a difference during a workout. Exercising naked allows for an optimal range of motion during movements and stretches.

"Even better," Kat Setzer, a Boston-based personal trainer told WBUR Radio in 2014, "is when you lose all the slimming panels from fancy workout pants and tops, you force your own muscles to learn to keep things pulled in on their own — which actually helps you stabilize your spine and hips. Many folks know that working out barefoot can help improve balance, because your feet can stabilize against the floor without shoes' cushioning throwing your senses off. Similarly, ditching the workout clothes allows exercisers to get a better sense of their alignment in exercises, which can mean more gains from the workout."

The Protection of Pants and Shirts

But other experts point out some of the shortcomings of coming to the gym without shorts.

And although weightlifting champ Herbst argues the benefits of naked exercise, he acknowledges the importance of clothes, too. It's a balance every athlete should find.

"Clothing should be worn with common sense to allow exercise that is comfortable and effective," says Herbst. "Clothing can both help and hinder exercise depending on the nature of the clothing and the exercise. For example, clothing can help if it protects against the elements such as heat, cold or rain, because it can help regulate body temperature by wicking away perspiration or keeping muscles and joints warm. It can also aid performance by providing compression or support."

It's also worth mentioning that closed-toe shoes are mandatory at most gyms, as a way to help avoid injury, and that clothing helps place a barrier between gym users. After reports of methicillin-resistant staphylococcus aureus (MRSA) and other infections spreading in gyms, the less direct contact with the sweat of others, the better.

Of course, if you want the best of both worlds, you could wear clothing at the gym or yoga class, and then work out naked at home. Just be careful with that javelin.

Since 2002 the southern New Zealand town of Dunedin has been home to an annual nude rugby competition. (Image blurred.)
Tim Clayton/Corbis/Getty Images
Now That's Interesting
Researchers have determined that donning athletic clothing can offer a psychological boost that makes one more active — it's a phenomenon known as "enclothed cognition." 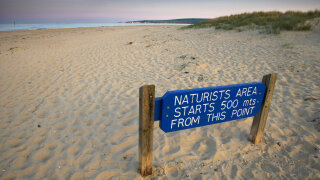 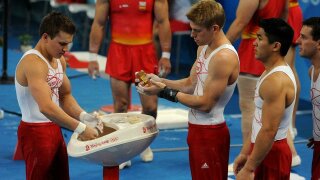 Honey Helps Gymnasts Get a Grip 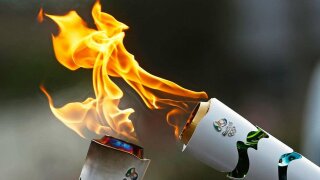 What Happens if the Olympic Torch Accidentally Goes Out?