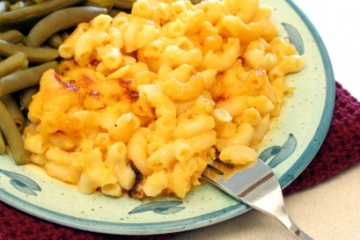 Comfort food can make you feel warm and safe.
©iStockphoto.com/rojoimages

A friend and I are dining at a neighborhood restaurant on a hearty meal of fettuccini Alfredo, mozzarella and tomato salad and bread dipped in olive oil. High in carbohydrates and fat, so-called comfort foods are an effective stress remedy.

"I eat fattening foods when I'm bored or depressed because it's something to divert me from my bad moods and it tastes good," my friend says. But "afterwards, it makes me feel worse because I know I shouldn't have eaten it."

When the going gets tough, people gravitate to the feel-good foods that we remember fondly from our youth — everything from macaroni and cheese to baked beans, ice-cream and candy bars. After the 9/11 terrorist attacks, an AC Nielson survey of grocery store sales reported a brief 12 percent surge in snack foods sales.

Do indulging in these simple pleasures come at the price of your waistline, health and a guilty after-taste? The verdict is decidedly mixed. The upside for my friend, who stays physically fit and keeps her cravings under control, is that she need not have eaters' remorse. "Even if you eat the most decadent dessert, if you control the portions, you can feel good about it and about yourself and move on," says Connie Diekman, a registered dietician and spokesperson for the American Dietetic Association (ADA).

Easier said than done. "The mind set in this country is that bigger is better," pronounces Margo Wootan, director of nutrition policy at the Center for Science in the Public Interest. Case in point: super-sized servings of fries, sodas, muffins and pasta are standard fare at many fast food and sit-down restaurants. "No one food is to blame but almost all foods are getting bigger in serving sizes," Wootan says.

According to David Katz, M.D. at the Yale University School of Medicine, overindulging in fatty, salty and sweet foods contributes to weight gain, and obesity itself can be a death sentence from diabetes, heart disease and cancer.

"People say they occasionally have a hot dog, hamburger and french fries, but when asked 'what else do you eat,' they say 'nothing,' meaning they're excluding whole grains, fresh fruits and vegetables," says Katz. "A poor diet and low levels of physical activity either have, or soon will, overtake tobacco as the leading underlying cause of premature, preventable death in the United States, resulting in almost 400,000 deaths per year."

In moderation, fats in foods boost energy when you're sluggish and help the body absorb fat-soluble vitamins. There is growing evidence that one of the healthiest edibles is the vice you're supposed to avoid: fat.

Not just any variety will do. You want the healthy, omega-3 fats found in nuts, olive oil, avocados and cold-water fish like salmon and mackerel, rather than the saturated, trans-fatty acids found in beef, butter, chips, cookies and many other foods. When it comes to fat, it pays to read the labels.

Two recent studies, one from Penn State, the other from Harvard University, found that comfort foods alone won't tip the scale. To the contrary, researchers at Penn State reported that a diet rich in peanut butter, of all things, can both help shed pounds and prevent heart disease.

Why can't we resist comfort foods? Their lure has both chemical and emotional triggers. "Some foods work on serotonin levels in the brain to produce a calming effect," Diekman says. "Adjusting your blood sugar levels by not being hungry can relax you."

Bernadette Latson, a dietitian and assistant professor at the University of Texas, Southwest Medical Center, says women may be more susceptible to stress eating because of the peaks and valleys in estrogen during the menstrual cycle and brain chemicals that regulate hormone and insulin levels.

Premenstrual changes can push women to eat more chocolates, chips and other foods associated with serotonin and insulin because their blood sugar is falling.

"Stress ... triggers a drop in serotonin and leads to a craving for sweets and starches, which help you cope," says Latson. "Because they help improve your mood and trigger happy memories, it's a learned response to eat chocolate, cookies and cake when under stress simply because we associate them with a sense of security."

In a survey of 1,005 consumers, Brian Wansink, a professor of marketing at the University of Illinois/Champaign, found that men and women both chose ice cream as their favorite. Women listed chocolate and cookies as their second and third choices, while men picked soup and pizza or pasta. "With the exception of ice cream, males generally claim they received more comfort from hot meals and from main meals than females," Wansink reported.

There are other gender differences. Diners who suppress their appetites and engage in emotional eating to relieve stress may each be especially vulnerable to poor eating habits: Researchers at the University College, London, found these behaviors are more common in women than men when they measured the eating attitudes and food preferences of 68 male and female study subjects.

The bottom line, says Diekman, is that it's okay to splurge on sweets and fats, sort of. "Don't get hung up on eating a candy bar if most of the time it's not part of your daily routine. If you say you're going to treat yourself once or twice a week and make healthy choices the rest of the time, the little treats may make you eat more healthy."

Below are some healthful tips from the ADA on enjoying your favorite comfort foods: