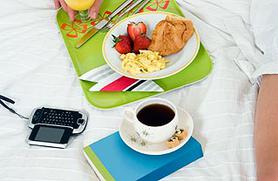 It's Sunday morning and you're out for a delightful brunch. You know that mile high stack of chocolate chip pancakes blanketed with maple syrup is outside of your diet, but you're just not quite sure how much. And then from across the table, your brunch mate snaps a shot of the stack and within minutes you know the damage. It turns out this is entirely possible.

According to a story on Reuters, which I first saw on Mother Nature Network, a new smart phone app can do just that. After taking a picture of a food item, the info is transmitted to a calorie database and within minutes it returns the range of calories in your meal.

The app is called MealSnap and it can transmit information for over 500,000 food items.

"The database can quickly help identity the food, how many calories there are, proteins, fat, carbs, vitamins, whatever you may want to know," said DailyBurn CEO Andy Smith. "Users can then choose to share what they've eaten on Twitter or FourSquare, leading to social accountability."

While undoubtedly very cool, this also sounds like a nightmarish invention for an already diet obsessed society. Consider that about 45 million of us diet each year and we spend between $1 and 2 billion per year on weight loss programs. And we're still the fattest country in the world and getting fatter. Maybe it's the way we're attacking the problem. It's time to stop worrying so much about the exact calorie count and focus on the big picture: eating a whole foods diet with organic fruits, vegetable, whole grains, and plant-based proteins.