Tai chi chuan is a style of kung fu that consists of fluid, graceful standing movements. Often called the "moving meditation," it emphasizes softness over hardness, a concern with things internal rather than external, yielding over confrontation.

Practiced for centuries in China, tai chi (pronounced "tie jee") has evolved into a system of about 100 movements to circulate chi, the body's internal energy. The Chinese Taoists believed that stagnation was the cause of disease and aging. Nature moves unceasingly, and tai chi prevents stagnation.

Though known more for promoting inner healing and relaxation than aerobic power, tai chi lowers blood pressure almost as well as moderate-intensity aerobics, according to results of a Johns Hopkins University School of Medicine study presented in 1998. A review in the July 1997 issue of the Harvard Health Letter noted that tai chi reduces some stress hormones and by conferring improved muscle strength — particularly in the lower body — lowers the risk of falling (the leading cause of death by injury in seniors).

The series of standing, graceful postures are meant to move chi smoothly throughout the body. The postures stimulate or sedate, as necessary, the energy channels, or meridians, which influence the various organs. Each movement is clearly defined by a specific alignment of the body and balance. Yet, like a slow-moving river, the motion never stops.

Although the slow, supple moves look simple, they require intense control, concentration and energy developed over months and years of training.

A variety of tai chi styles have evolved, including the Yin and Yang styles (more about that later) and the Chen, Wu and Sun schools. Each style includes numerous "forms" — combinations of stances that flow continuously into one another. All stances and breathing, in turn, originate from the center of the body, which is the tan t'ien (pronounced "dantian"), about two inches below the navel.

Because there are so many styles of tai chi and so many organizations that offer instruction, it is hard to track specifically how many people practice it in the United States. But as more Americans become disenchanted with traditional medicine and the impersonal aspects of managed care, they're turning to tai chi and other practices that treat the body as a whole, not merely the physical symptoms.

Before You Begin a Fitness Program 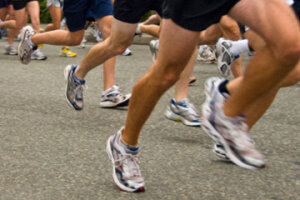 Dos and Don'ts of Running