Could I lose weight just by eating slower?

by Julia Layton
Next 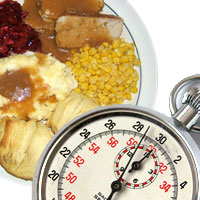 For decades, dietitians, doctors and nutritionists have made the link between eating speed and weight. People who eat slower tend to eat less and weigh less. The slower you eat, the less food it takes to get you full. The commonly stated reason for this is that the feeling of satiety doesn't really come from your stomach. Like every other feeling you experience, it comes from your brain. It takes time for your body and your brain to complete the communication exchange that finally tells you to stop eating because you're full.

In the last couple of years, science has backed up this common knowledge with experiments that test eating time, amount eaten and the feeling of satiety. The results are consistent: Eating slower means eating less and still feeling "full." A study presented at the North American Association for the Study of Obesity in 2004 had 28 overweight subjects eat a meal at varied eating speeds, always eating as much as they wanted. In one meal, the subjects ate as quickly as they normally would; in another meal, for the first half of the meal they could only take a bit of food when they heard a beep, and for the rest of the meal they could take a bite whenever they wanted; and in the third meal, they had to match bites to beeps for the entire meal (the bites went on indefinitely, so they could still eat as much as they wanted). Invariably, the subjects ate less during the beep-mediated meals than in the free-form meal.

So what's the scientific reasoning behind the results? It's the same as the common-knowledge reasoning. Essentially, people who eat very quickly are overshooting their actual point of satiety. Since the feeling "I am full" comes from the brain, not from the stomach, the amount of food in your stomach is not the only factor involved in the satiety process. It takes time for the body to tell the brain that it has had enough food; and only when the body has sent this signal to the brain can the brain activate the satiety response (which originates in the hypothalamus) that makes us stop eating. Some experts claim it can take up to 20 minutes for the body's signal to reach the brain. So in theory, someone who takes one bite a minute may only overshoot her fullness by 20 bites of food, while someone who takes five bites a minute eats 100 bites more than her body really wants before the satiety signal makes it to the brain.

For more information on weight-loss techniques and related topics, check out the following links: