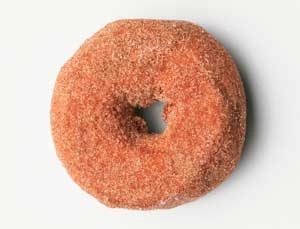 ©2006 Publications International, Ltd.Sugar is not on the menu for this low-carb diet.

This is one in a series of diet books written by the husband-and-wife team of Richard and Rachael Heller. Most of these books are follow-ups to their original 1991 book, The Carbohydrate Addict's Diet. This updated version was written with the over-40 reader in mind, but it is basically the same song with some different verses. The Hellers believe that 75 percent of overweight people -- and many people of normal weight -- are addicted to carbohydrate and that dealing with that addiction is the key to successful weight loss.

They define carbohydrate addiction as a compelling hunger, craving, or desire for carbohydrate-rich foods: an escalating, recurring need or drive for starches, snack foods, junk food, or sweets. The Hellers maintain that for some people eating carbohydrate is like doing drugs. Their diet plan greatly restricts carbohydrate intake, distributing it in measured amounts at a single meal. There is a Carbohydrate Addict's plan for just about everyone, including carbohydrate-addicted kids.

What's for Breakfast, Lunch, and Dinner?Though the Hellers' plan is basically a low-carb diet, it doesn't restrict carbohydrate to the extent that the Atkins diet does (see sidebar). In fact, it allows for a single carbohydrate-rich meal each day. Their diet prescription calls for two no-carb meals (called "craving-reducing" meals) and one controlled-carbohydrate meal (called a reward meal) each day. The daily reward meal consists of one-third protein-rich foods, one-third carbohydrate-rich foods, and one-third non-starchy vegetables. If you want second helpings, you have to dish up the same one-third, one-third, one-third distribution on your plate -- and eat everything. You can eat as much as you want, but you must eat it all within a one-hour time limit. The Hellers recommend eating complex carbohydrates such as pasta, bread, and potatoes. Sugar is not on the menu. Once you've lost the weight, you can add carbohydrate to your reward meal a little at a time if you're maintaining your weight.

Gains and Losses/What's the Damage? Though not as extreme as the Atkins diet, the Hellers' diet plan is just as likely to be low in calcium and fiber and high in cholesterol-raising saturated fat. The symptoms, such as weakness, irritability, and dizziness that the Hellers attribute to carbohydrate craving could be due to any number of medical conditions and should be checked out by your health care provider, not treated with a diet book. And, ironically, the lack of concentration that they attribute to overindulging on carbohydrate is actually a symptom of not getting enough carbohydrate. That's because glucose, the sugar the body manufactures from the carbohydrate you eat, is the brain's primary fuel. Like the Atkins plan and other low-carb diets, the Hellers' plan is likely to result in weight loss, at least in the beginning. But limiting all carbohydrate intake to one meal a day is not realistic, and it's unlikely that most people would be able to stick to that regimen for a lifetime.

Now let's move on to the Schwarzbein Principle Diet -- in the next section.