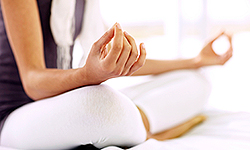 Most people in the Western world would consider Sahaja Yoga a form of meditation, rather than a type of yoga practice. In fact, it is often called Sahaja Meditation in the United States. The idea behind this practice is to bring about "a breakthrough in human awareness" and self realization through mental stillness, rather than through sequences of active postures on a mat.

Sahaja Yoga was founded by Shri Mataji Nirmala Devi in 1970, who spread the practice from her native India to England and America, and then across the world. She believed that enlightenment is not something that can be paid for, and so Sahaja Yoga classes have always been offered free of charge.

Today, Sahaja Yoga classes usually consist of a brief introduction followed by 30 to 40 minutes of guided meditation. During meditation, you should keep your left hand on your lap, palm up, and place your right palm on various parts of the body as directed by your instructor. You may be encouraged to take your shoes off for meditation, so that negative energy can be sucked out through your feet. [Source: SahajaYoga.org]

Practitioners claim that with Sahaja Yoga, unlike other forms of meditation, it is possible to reach self realization and "Thoughtless Awareness" almost immediately -- sometimes during a person's first session. The act of achieving self realization is sometimes referred to as having your Kundalini -- the inner energy coiled inside each of us -- released, or awakened, and the word Sahaja means "in-born," to refer to this inner energy.

Sahaja Yoga focuses on a network of energy channels within the body known as the Subtle System, which starts in the sacrum, at the base of the spine, and rises up through the crown of the head. When a person's inner energy is activated and begins to travel through the Subtle System, according to Sahaja Yoga philosophy, you will actually feel it being released "in the form of a cool, or sometimes warm, breeze." [Source: SahajaMeditation.org]

In a 2012 University of Sydney study, people who regularly practiced Sahaja Yoga–style meditation had higher mental health scores than those who didn't. Meditation has also been linked to other health benefits, including stress relief, an improved immune system, and delayed signs of aging. [Source: Manocha et al.]

Is Lectin-free the New Gluten-free?
Triceps Exercises
DASH Diet: What You Need to Know