Quick Tips: What is AntiGravity Yoga? 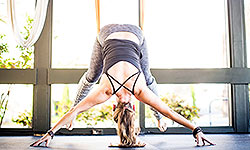 Antigravity yoga can provide a new challenge to your yoga routine.
RyanJLane/Getty Images

For the yogis that don't mind having two feet off the ground, AntiGravity yoga may provide a new challenge. It may sound like something you do in a spaceship, but really, you need little more than a silk hammock hanging from a ceiling -- and a sense of adventure -- to practice AntiGravity Yoga. AntiGravity is one brand of aerial yoga, a type of exercise that combines yoga with other types of exercise, such as dance and gymnastics, into a hybrid mind-body workout.

Former gymnast Christopher Harrison founded AntiGravity Inc. in 1991 as an acrobatics performance company, and developed the brand's signature silk hammock a few years later. When he discovered the benefits of doing yoga -- specifically inversion poses -- in the hammock, he rebranded his company and began offering classes to the public. In 2007, AntiGravity Yoga was born.

Anyone who can do at least three consecutive sit-ups can do AntiGravity Yoga, according to the brand's website. During a class, you'll be "cocooned" in a supportive silk hammock while an instructor leads you through a series of postures designed to "recalibrate the body" and decompress the spine. During inversion postures, you'll hang about three inches above the ground.

"When you're hanging upside down in meditation instead of sitting right side up on your cushion, you can practically feel each vertebrae sucking away from the one underneath it, lengthening and stretching you out," says Brigitte Bourdeau, a yoga instructor in New York City. And in fact, AntiGravity Yoga promises that after a class, you will be stretched to your maximum height -- making you a quarter-inch to an inch and a half taller than when you started. (Unfortunately, these effects are not permanent.) [Source: AntiGravity Yoga]

Because you'll be upside down a lot, it's important not to wear anything too loose on top to class. Cotton or cotton blends are recommended over slippery synthetics, which can make staying in position in the hammock difficult. You don't need socks, but you may want to wear sticky gloves to help your grip. Once you've taken AntiGravity Yoga in a classroom setting, you can even purchase your own hammock to practice in at home.

While AntiGravity Yoga is the original aerial yoga technique, other programs in studios across the country also use the phrase aerial yoga or flying yoga to describe their practice. Flying Yoga Shala, for example, a studio in Oakland, California, offers classes in aerial yoga (using silk hammocks) and FlightCamp TRX (using the TRX suspension system).

Yoga Makes People Super Emotional. But Why?
Three Exercises for a Tighter You
5 Office Exercise Tips