What is the importance of breathing in yoga? 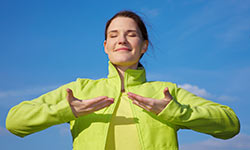 Breathing can be just as important as poses.
Robert Kneschke/Veer

Breathing is obviously an important part of every day, whether you're doing yoga or not. Though we don't typically focus on our breath during the day, in a yoga class, breathing is just as important as the poses and serves a greater purpose. Each inhale and exhale can energize, calm, and help you form a deeper mind-body connection.

Vinyasa, one of the most common forms of yoga practiced in the United States today, means, in Sanskrit, "breath linked to movement." In these classes, movement from one posture to the next is usually done along with an inhale or an exhale, says Annelise Hagen, a yoga instructor in New York City.

"When you're breathing in, that's when you have more energy -- that's generally when you would initiate a movement that involves engaging or contracting your muscles," she says. "And on the exhale, you typically want to be stretching, lengthening, or relaxing."

In a Vinyasa practice, yogis often use something called an Ujjayi breath. Ujjayi translates to "to become victorious" or "to gain mastery," and using a Ujjayi breath may even help you master your own practice a bit more. To perform Ujjayi breathing, constrict the back of your throat as you breathe in and out through your nose, so that your breath is audible -- similar to a whisper, or to the roar of the ocean.

Concentrating on your Ujjayi breath while you practice can help lead to better focus on the flow from move to move, tune out external distractions and remind you to take full, complete breaths. They key is not to be too loud or too quiet with your breath, but to blend in with the rest of the class.

Some experts also believe that Ujjayi breath generates internal heat and can help regulate healing in the body, as well as relieve headaches, sinus pressure and congestion. [Source: Mitchell]

Ujjayi breath is only one type of breathing used in yoga, however, and breath does not always have to be linked to movement in a yoga practice. In fact, most yoga practiced today is derived from an eight-limbed philosophy, with one entire limb devoted to breath.

The limb of yoga that deals with breathing is called pranayama, which translates to "life force extension." This shows how important breathing is to yoga -- it is believed that it can literally extend life. "There's a saying that everybody is born with a certain number of breaths," says Hagen. "Some people believe that if you breathe fuller and deeper and you make those breaths as long as they can be, you'll actually live longer."

Every branch of yoga has its own breathing exercises, designed to help focus the mind and invigorate the body. Some classes may have a dedicated pranayama period of about 15 minutes, where students sit cross-legged and focus on breathing with their eyes closed. Other classes may dedicate the entire 60 or 90 minutes entirely to pranayama. During this focus on pranayama, instructors may teach some of the following exercises:

Deergha Swasam: The foundation of yogic breathing, this exercise may also be known as deep belly breathing. You should imagine filling your lungs from the bottom to the top, by expanding the abdomen, then the rib cage, then the upper chest. On the exhale, imagine emptying out your lungs in the reverse order, from top to bottom. Your belly should expand on the inhale, and pull in slightly at the end of your exhale. Studies show that you can take in up to seven times as much air while breathing in this way than with a shallow breath that expands chest first. [Source: Cummins]

Kapalabhati: This exercise involves rapid, forceful exhalations of air propelled by strong, inward thrusts of the abdomen. Students are instructed to first take a deep breath, and then let the air out in short, rapid bursts. Kapalabhati is practiced in Integral yoga.

Nadi Suddhi: Also an Integral yoga exercise, Nadi Suddhi is also known as alternate-nostril breathing, and is practiced by using the fingers and thumb of the right hand to close off one nostril as you exhale and inhale, and then the other as you repeat.

What's the Worst Fad Diet Ever?
What does my waist measurement mean?
Get Fit In As Little As Two Hours a Week