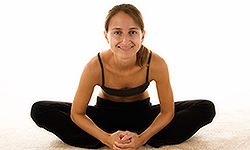 Yoga can help with weight loss -- just not in the way you may think.
iStockphoto/Thinkstock

If you look at celebrities who practice yoga (ahem, Jennifer Aniston), you may think that Downward Dog is a quick way to get a toned and tight body. Unfortunately, if you're looking for a quick fix that promises flat abs fast, yoga is not your best bet -- but then again, not much is.

But a regular yoga practice can play a role in helping you achieve your long-awaited six-pack; it can help you lose weight and tone from head to toe, including your abdominal area. Yoga just boosts weight loss in a more holistic way than you might think.

To better understand this question, it's important to understand how the body burns fat, in general. Although we can target certain body parts for toning and strengthening (like our arms, legs, abs, or glutes, for example), there is no research-proven way to blast more fat cells in one specific area than in any other. And while extra pounds around the belly are often the easiest weight to put on, they can also be some of the hardest to shed.

That being said, a diet and exercise plan that allows you to lose weight all over will almost certainly benefit that belly bulge. (To shed pounds consistently, remember that the key is to burn more calories than you take in every day.) And that's good news, because excess fat around the abdominal area has been shown to raise the risk of heart disease, diabetes, and certain types of cancer. [Source: Mayo Clinic]

Yoga can be an important part of your belly-shrinking plan, regardless of whether you've ever practiced before. Not only does it burn calories and help tone your trouble spots, but research also shows that it has the power to alter your eating patterns, your sleep habits, and your mood -- all things that will affect how much weight you pack onto your waistline, and how quickly you can burn it off.

How Yoga Can Fuel Weight Loss

Yoga, like all forms of exercise, burns calories -- some forms more than others. A fast-paced, vigorous style of yoga, like Vinyasa or Ashtanga, will burn more fat and calories, for example, than a slow, restorative class.

"Yoga certainly does have a cardiovascular element," says Annelise Hagan, a yoga instructor in New York City. "A vigorous athletic form of yoga can raise your heart rate for a good 20 minutes." And moves that focus on the core -- such as plank, chaturanga, and boat pose -- can help tone the abdominal muscles underneath, she adds.

That may not be the most important thing to consider when choosing a yoga class, however. "What's really going to give you more weight loss is the mindfulness aspect of yoga," says Colleen Saidman Yee, creator of Gaiam's Yoga for Weight Loss DVD. "You may build strength and burn calories from a faster paced class, but you'll really develop the tools you need to listen to your body in a slower, more meditative practice."

A 2009 study from the Fred Hutchinson Cancer Research Institute found that people who practiced yoga regularly were likely to maintain or lose weight during the study period, while those who did no yoga were likely to pack on extra pounds. The researchers credit the yogis' weight control to their mindful eating habits -- they paid attention to what they ate and stopped when they felt full. [Source: FHCRC.org]

In addition, yoga has been shown to help improve sleep problems and symptoms of depression. [Source: Pedersen] And if you're already trying to lose weight by dieting, research shows that not getting enough sleep can sabotage your body's efforts to burn fat. [Source: Peeples]

When Saidman Yee set out to make a weight-loss DVD, she incorporated all of these ideas: "The first section focuses on a lot of standing poses and arm movements to get the heart rate up, and the second section is all about the midsection," she says. "But the last section is all restorative poses and breathing exercises, to help you wind down get a good night's sleep."

Gender at the Gym: How Workout Preferences Vary by Sex, Age
What causes the muscle cramps in my legs?
5 Ab Exercises You Can Do At Work