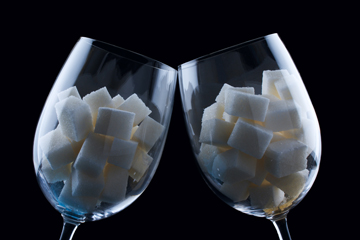 If you're diabetic and you like to enjoy an occasional drink, doctors recommend low-sugar alcoholic beverages.
Dmitry Kim/Hemera/Thinkstock

If you have diabetes, you know how much micromanagement is involved in your day-to-day eating and drinking decisions. Keeping your blood sugar at the correct levels is a constant balancing act, and every substance that enters your body could tip that balance. Alcohol is one of those elements that must be very tightly managed. When consumed in moderation, it usually isn't a problem for diabetics. But drinking any more than the bare minimum can cause major trouble.

For diabetics, there's a big difference between the effects of chronic and occasional drinking. Moderate alcohol consumption is generally fine, provided that the diabetes is well-managed. With very sensible drinking, the liver can easily do its job flushing out the alcohol -- blood sugar levels will rise, but they'll stay under control. Doctors recommend no more than two drinks a day for men and one for women, and they also advise sticking to low-alcohol, low-sugar beverages.

Chronic alcohol use and continued binge drinking -- as well as drinking when your diabetes isn't controlled or your blood sugar is low -- can wreak complete havoc on blood sugar levels and can also worsen diabetes side effects. With the liver working overtime to clear out alcohol instead of doing its normal job of changing stored carbohydrates into glucose, blood sugar levels drop drastically. Heavy alcohol use can also aggravate diabetic eye disease and nerve damage.

It's very important for diabetics to make sure they've eaten before drinking alcohol or best that they drink during a meal. The presence of food in the stomach slows the absorption of alcohol into the blood, which allows for more controlled changes in blood sugar. Even among non-diabetics, the double whammy of chronic drinking on an empty stomach lowers blood sugar and also weakens the body's ability to recover from low blood sugar. When you're drunk, you're not as aware of your blood sugar so you might not attempt to fix the problem. That'll become a bad situation even if you don't have diabetes, and it's obviously very problematic for diabetics.

Alcohol's negative effects on diabetes symptoms have been well-known for years, but a 2013 study showed that binge drinking might actually cause Type 2 diabetes. Researchers from Mount Sinai Medical Center in New York found that alcohol interfered with insulin receptor signaling in the brains of rats, and it didn't matter if the rats had been fed or not before being administered the alcohol. The rats then developed insulin resistance, which happens when the body loses control of blood sugar levels because it's no longer responding correctly to insulin. Insulin resistance is a major cause of Type 2 diabetes.

So, even if you aren't diabetic, chalk up yet another reason to curb the binge drinking. The short-term fun definitely isn't worth the long-term problems.