What does alcohol proof mean? 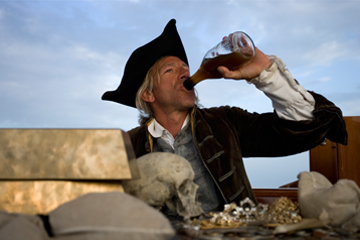 That pirate may not care what the proof of what he's swilling is, but we do.
Candela Foto Art/Kreuziger/Getty Images

If you've ever examined a bottle of alcohol (and who hasn't?), you've probably noticed that there are two measures of alcoholic content printed on it. One is the alcohol percentage by volume, and the other is the proof. You might also have noticed that (in the United States, anyway) the proof is always twice the percentage. So why do we need both numbers if one is always twice the other -- isn't that a little redundant? And what is proof, other than a number you get when you double another number?

Explanations abound on the Internet for the origins of the term "proof." The details vary, but it boils down to a test involving gunpowder and fire. Yes, gunpowder and fire. Depending who you ask, this test could have been devised anywhere from the 16th to the early 18th century, and it came about because the need arose to test the alcoholic content of the spirits that people were making and selling.

In some of these origin tales, it's pirates or sailors who did the testing because they were tired of being sold watered-down rum by devious merchants. Sometimes it was the British or American government inventing the test because devious farmers were watering down the whiskey they distilled from their corn crops. Whatever the case, the testing agent was gunpowder, whether it was poured into the alcohol or a pellet of it was soaked in alcohol. The alcohol/gunpowder combo was then ignited, and what happened next supposedly determined how much alcohol was actually present.

These stories explain how the term "proof" might have originated, but they don't really tell us how our modern-day definition came about. In an article published in the Journal of Chemical Education, a chemistry professor named William B. Jensen does mention the gunpowder test but says that in 19th-century United States, 50 percent alcohol by volume was decided upon as the "100-proof" standard for taxation purposes. So that's why proof is always twice the percentage [source: Jensen].

Other countries have proof systems, too, but they're all wildly different -- what's 100 proof in the United States, for example, is 50 proof in France and 87.6 proof in the United Kingdom [source: Jensen]. But most countries do require that the actual percentage also be displayed, sparing international travelers a lot of confusion and unnecessary calculations.

So if alcohol percentage by volume is the most straightforward, scientific measurement, why can't we just leave it at that? Why does proof, an antiquated, redundant term, still have to be printed on every bottle of alcohol? The answer, we're afraid, might have been lost to history, just like the details of that gunpowder test.