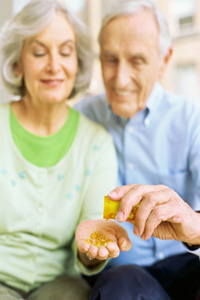 Studies show that omega-3s may be able to help some cancer patients.
George Doyle/Getty Images

Despite decades of study, cancer remains one of the scariest diseases that humans can face. Understandably, researchers have looked with great excitement at any natural substance that might help treat or even prevent cancer.

In the 1950s, German scientist Johanna Budwig became a big proponent of essential fatty acids. She claimed that when cancer patients ate a diet high in flaxseed oil, many of their tumors shrank within three months. Some patients who were on the diet were supposedly cured of their cancer [source: American Cancer Society].

A few studies found that fish oils, which are high in omega-3 fatty acids, suppressed the growth of certain types of cancer in animals. But the studies produced mixed results in humans.

Some research did provide evidence that omega-3 consumption might reduce the risk of hormone-fueled cancers like breast cancer, or inhibit the growth of cancers that affect the lungs, prostate and colorectal regions. However, other studies actually found that omega-3s increased the risk of these cancers [source: JAMA].

There has also been some evidence that taking omega-3 might improve appetite and help prolong the survival of cancer patients who lose weight and become malnourished as a result of their disease. Again, however, the results have not been conclusive [source: American Cancer Society]. Also questionable is the idea that omega-3 fatty acids might help patients undergoing surgery to treat their cancer. Although one study showed that omega-3 supplements preserved muscle mass in patients who were having surgery for esophageal cancer (a surgery that typically causes patients to lose muscle mass), other studies haven't found similar benefits [source: Annals of Surgery].

Researchers say there is still not enough evidence to prove that omega-3 fatty acids can reduce the risk of cancer, although studies are still ongoing.