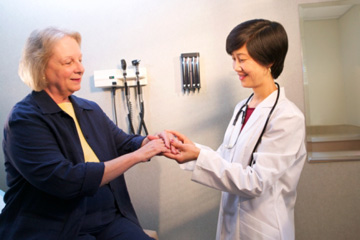 Omega-3 has been known to reduce inflammation, which is good news for arthritis sufferers.
Comstock Images/Getty Images

One of the many benefits of omega-3 fatty acids is their ability to reduce inflammation throughout the body. That effect might provide some relief for people who have the inflammatory disease arthritis.

Arthritis results from the immune system's abnormal response to the body's own tissues. The immune system usually launches an inflammatory response against infectious agents, such as bacteria and viruses. In people with arthritis, that immune response misfires and mistakenly attacks the body's own tissues (in this case, the joints) as though they were foreign invaders. This leads to the swollen, stiff and achy joints that plague arthritis sufferers.

Researchers have discovered that not only do omega-3s help fight inflammation, but that once inside the body, they're converted into even more potent anti-inflammatory compounds like resolvins [source: Arthritis Today].

A few studies have found that taking fish oil supplements every day can reduce morning stiffness, and the number of swollen joints in patients with rheumatoid arthritis. Some patients who took omega-3 fatty acids were even able to reduce -- or even stop - use of arthritis medications such as nonsteroidal anti-inflammatory drugs (NSAIDs) and corticosteroids. In the studies, participants needed to take omega-3 fatty acids for three months to see an improvement; the benefits increased the longer people took them [source: American Family Physician].

Omega-3 fatty acids show great promise for relieving arthritis discomfort, but older adults should use caution when taking them. In high doses, fish oil supplements can interact with blood pressure drugs, blood thinners and other medications. These supplements can also contain high levels of vitamins A and D, which can be dangerous in large quantities [source: NCCAM]. Of course, you should talk to a doctor before starting any supplement regimen.