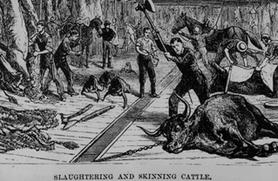 What could be more American than a glass of milk? Cow's milk, that is. In light of this common perception, the time is long overdue to add the milk mustache to that ever-growing list of American myths. Human beings are not designed to drink any milk except human milk (only during infancy, of course). As you'll see below, consuming dairy products—milk, cheese, yogurt, sour cream, ice cream, etc.—is not green and it's not healthy.

It's also a nightmare for the cows themselves. Here's a little of how the folks at GoVeg describe it: "The 9 million cows living on dairy farms in the United States spend most of their lives in large sheds or on feces-caked mud lots, where disease is rampant. Cows raised for their milk are repeatedly impregnated. Their babies are taken away so that humans can drink the milk intended for the calves. When their exhausted bodies can no longer provide enough milk, they are sent to slaughter and ground up for hamburgers."

*Living dairy-free has never been easier...so here's a little motivation to get you on the greener, cruelty-free, not-milk track.

The first four are environmental reasons to avoid milk.

Lots of waste. In fact, your average dairy cow produces 120 pounds of waste every day—equal to that of more than two dozen people, but without toilets, sewers, or treatment plants.

California produces one-fifth of the country's total milk supply. According to MilkSucks.com, "in the Central Valley of California, the cows produce as much excrement as a city of 21 million people, and even a smallish farm of 200 cows will produce as much nitrogen as in the sewage from a community of 5,000 to 10,000 people, according to a U.S. Senate report on animal waste."

The dairy industry is an extension of the beef industry (used-up dairy cows are sent to the slaughterhouse after an average of four years, one-fifth their normal life expectancy) which means it plays a major role in creating climate change. Here's the equation: The dairy industry uses cows before passing them on to be slaughtered by the beef industry which is now recognized as an environmental nightmare. "According to a UN report," writes Brian Merchant, "cows are leading contributors to climate change ... Accounting for putting out 18% of the world's carbon dioxide, cows emit more greenhouse gases than cars, planes, and all other forms of transportation combined." That means the industry of exploiting all cows—including dairy cows—involves destructive practices like deforestation and polluting offshoots like runoff.

Under current industrial methods, cow's milk is often a toxic bovine brew of man-made ingredients like bio-engineered hormones, antibiotics (55% of U.S. antibiotics are fed to livestock), and pesticides—all of which are bad for us and the environment. For example, unintentional pesticide poisonings kill an estimated 355,000 people globally each year. In addition the drugs pumped into livestock often re-visit us in our water supply.

Which brings us to... health reasons to avoid milk.

The biochemical make-up of cow's milk is perfectly suited to turn a 65-pound newborn calf into a 400-pound cow in one year. It contains, for example, three times more protein and seven times more mineral content while human milk has 10 times as much essential fatty acids, three times as much selenium, and half the calcium. Some may like cow's milk but drinking it is both unnecessary and potentially harmful.

6. Milk is actually a poor source for dietary calcium.

6. Milk is actually a poor source for dietary calcium. Humans, like cows, get all the calcium they need from a plant-based diet.

7. Contrary to popular belief, milk may increase the likelihood of osteoporosis.

It is still widely accepted that the calcium in dairy products will strengthen our bones and help prevent osteoporosis, but studies show that foods originating from animal sources (like milk) make the blood acidic. When this occurs, the blood leeches calcium from the bones to increase alkalinity. While this works wonders for the pH balance of your blood, it sets your calcium-depleted bones up for osteoporosis. As explained by John Robbins, "The only research that even begins to suggest that the consumption of dairy products might be helpful [in preventing osteoporosis] has been paid for by the National Dairy Council itself."

In 2005, the Harvard School of Public Health had this to say on the consumption of dairy products: "Three glasses of low-fat milk add more than 300 calories a day. This is a real issue for the millions of Americans who are trying to control their weight. What's more, millions of Americans are lactose intolerant, and even small amounts of milk or dairy products give them stomach aches, gas, or other problems."

It's easy to go dairy-free. Here are 7 easy vegan recipes to set you off on the right path.

*Editor's Note: If you aren't ready to take the dairy-free plunge, cutting back is a significant step in the greener direction, as is cutting back on meat if not cutting it out entirely.