How much dirt do I eat in a year? 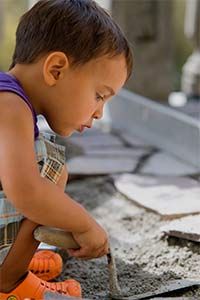 Kids under 1 eat about 60 milligrams of dirt a day; from ages 1-20, they eat 100 milligrams.
anitaCM/iStock/Thinkstock

We all know we shouldn't eat dirt, but we do it anyway. Mostly not on purpose – dirt gets into our bodies all day, every day, whether we want it to or not. It's understandably difficult to figure out exactly how much is getting in, but that might be beside the point. As one author of a dirt-consumption study astutely noted, "Other than water, what little stuff we humans have inside us is largely dirt ... Most solids that make up humans and other creatures either are now or recently were dirt ... transformed by sunlight into plants or animals."

We get our daily dirt allowance in all kinds of ways, from contaminated food, dust inhalation, and from not washing our hands before eating. The Environmental Protection Agency (EPA) has compiled an enormous amount of research on dirt consumption. Apparently the dirt we consume breaks down into two basic parts: soil and dust. About 45 percent of the stuff we inhale or inadvertently eat is soil, and 55 percent is dust.

The EPA numbers on unintentional dirt consumption focus on children, with one study reporting that babies from 6 weeks to 1 year old generally get 60 milligrams a day. From ages 1 to 20, that amount goes up to 100 milligrams a day. (For reference, 50 milligrams equals one-sixth of an aspirin tablet. So we're not talking all that much dirt). If you take those daily numbers and make them annual, that would be 36,500 milligrams or 1.3 ounces per year. Again, not a totally horrifying amount.

Kids, as we all know, just love eating dirt, especially between the ages of 1 and 3. One researcher theorized that although childhood dirt-eating certainly is based in curiosity about the world and the new ability to play and grab, it could also be an effort to get some vitamins and minerals. Purposeful dirt-eating usually happens around a year old, which is when many babies stop breastfeeding, so maybe they're trying to regain some of that nutrition.

However, some people keep eating dirt after early childhood, a condition called geophagy, or soil pica (pica is the habit of eating nonfood items). In American culture, geophagy is regarded with concern and definitely a bit of fascination. Pica, in fact, is a recognized disease by the U.S. Agency for Toxic Substances and Disease Registry, with intentional dirt consumption of 500 milligrams a day qualifying as "pathological" [source: Callahan]. But historically, and in many other cultures, it's not so odd or abnormal to eat dirt. Some pregnant women in sub-Saharan Africa eat dirt to soothe stomach upsets during morning sickness or to add extra nutrients to the developing fetus' body [source: Callahan].

So while there's definitely cause for concern about contaminated food and soil, maybe we don't need to worry so much about inadvertent dirt consumption. It's only natural, and we're all made of dirt anyway, right?