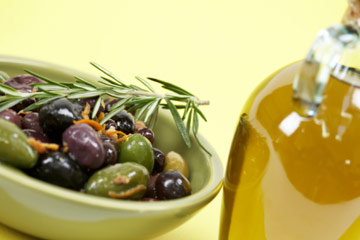 Olive oil has become a favorite choice among many cooks for its versatility and distinct taste. If you ever watch (or have even heard of) the popular TV cook Rachael Ray, you probably know that she is famous for using olive oil in most of her recipes. She has become so synonymous with the oil that she helped make it a popular fad, launched the abbreviation "EVOO" (for "extra virgin olive oil") into common kitchen parlance and even markets her own brand of it.

But the olive oil craze has also grown as studies continue to reveal its numerous health benefits. When researchers started looking into why people in the Mediterranean region are generally healthier and have a longer life expectancy than others, they found that this was largely a result of their healthy diet. And they believe that diet is so healthy because of their heavy consumption of olive oil.

As you might expect, this is because olive oil is nutritious in and of itself. And we'll be talking about what researchers believe is in olive oil that makes it so healthy for us.

What's fascinating is that people in the Mediterranean region have been reaping the benefits of olive oil for millennia, without knowing all the scientific nutrition information we know today. Olive oil was highly valued in ancient Mediterranean cultures for use in food, but also as lamp fuel and other medicinal uses. There were legends about the origin of the olive tree, and it came to represent such things as peace and fertility. We get our English word "oil" from the Romans ("oleum"), who derived it from their word for olive ("oliva").

Although these days we can extract oil from olives with industrial machines, ancient people had to crush olives by foot or stone, or eventually with a mule-powered crushing mill. Crushed olives turn into paste, which they divided into sections and placed on discs. These discs were piled into stacks, which were squeezed together to extract the oil.

Up next, we'll take a look at exactly which nutrients you'll find in a bottle of olive oil.

In order to understand the nutritional make-up of olive oil, we'll first need to go over the different kinds of fats. Olive oil contains monounsaturated, polyunsaturated and saturated fats.

Certain fats (or "fatty acids" in chemistry lingo) are classified as saturated because in their molecular construction, the carbon is saturated with as much hydrogen as it can hold. Meat and dairy are big sources of this type of fat. Saturated fats are notorious as the "bad fats" because they promote bad cholesterol.

Actually, all oils contain these kinds of fats; it's the proportions that make the nutritional difference. To give you an idea of the different proportions in a typical extra virgin olive oil, a serving size (1 tablespoon) contains about 2 grams of saturated fat, 2 grams of polyunsaturated fat and 10 grams of monounsaturated fat.

Olive oil is high in a particular monounsaturated fat called oleic acid. Depending on various factors, such as the kind of olives used to make the oil and even the soil used to grow them, olive oil is typically 55 percent to 85 percent oleic acid.

Olive oil is also rich in antioxidants, such as phenols and tocopherols as well as vitamin E. On the next page, we'll talk about how these nutrients are good for you, as well as the other overall health benefits of olive oil. 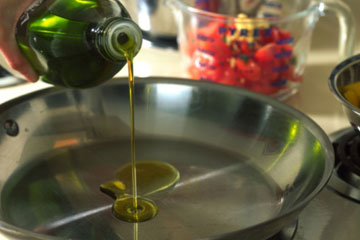 Because olive oil is so rich in good fats, as we discussed on the previous page, and those fats are so good for cholesterol levels, it should come as no surprise that olive oil is healthy for your heart.

Studies suggesting that olive oil can reduce a person's chances of developing heart disease led the Federal Drug Administration (FDA) in 2004 to allow manufacturers to boast such on their olive oil labels. However, it's best to use olive oil as a replacement for oils and butter that are high in saturated fats instead of simply adding olive oil to your diet.

The oleic acid we discussed on the last page, in addition to certain compounds also found in olive oil (squalene and terpenoids), are also believed to be effective in preventing cancer, according to 2004 study in the European Journal of Cancer Prevention.

The highest quality comes from the first pressing of the olives and is known as "extra virgin." The next, known as "fine virgin" (or simply "virgin"), comes from the second pressing. Lower-quality olive oils, including "pure" and "light" (the lowest quality) involve processing and refining.

Another piece of good news is that olive oil has no trans fats, which are unhealthy fats developed by a manufacturing process known as hydrogenation. However, we must caveat that with this point: If you cook olive oil beyond its smoke point, its chemical structure will change and it will partially hydrogenate. This process could produce trans fats.

So as long as you keep an eye on the temperature, olive oil is one of those rare guilt-free pleasures.