by Gayle A. Alleman

The Three Tenets of Weight Loss 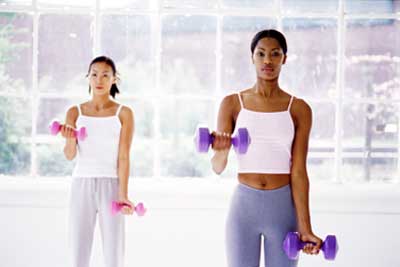 © 2006 Publications International, Ltd.Being more active is a good way to control your calories.

Taking charge of your weight begins with taking charge of the number of calories you eat. And you can do that by making small changes that add up to big differences. For instance, eating a mere 100 calories less per day can mean staving off a 10-pound weight gain each year. Here's the math: 100 calories X 365 days = 36,500 calories, which is just over 10 pounds (10 X 3,500 calories in a pound).

But let's correct one weight-loss fallacy at the outset: Eating fewer calories does not mean skipping meals. You may think that skipping meals will sharply reduce your calorie intake. But it doesn't work that way. Skipping meals actually slows down your body's metabolism, the opposite of what you're trying to accomplish. That's because meal skipping triggers our evolutionary response to famine, which is to conserve energy and lay down fat reserves in order to survive.

Eating regular meals, on the other hand, tells your body that plenty of food is available, so its metabolic rate can continue humming along. Those meals just need to be composed of modest amounts and fewer calories. You can eat fewer calories by:

Once you know how, it's easy to choose similar foods that have less fat or added sugar. The simple meal makeover, below, shows how minor changes add up to a big difference in total calories. The flavors and portion sizes are the same so you will feel as satisfied with the new meal as you did with the old one. Substituting foods that are lower in calories yet similar to the originals cut the calories in that meal by more than half. You can learn to do the same. Knowing which foods to substitute for those that are higher in calories is vital to eating fewer calories each day. Recognizing which foods to fill up on while getting the least amount of calories is important, too. In general, plant foods -- vegetables, fruits, and grains -- are quite low in calories, as long as they are not processed with added fat or sugar. That's why the 2005 Dietary Guidelines recommend that these three groups make up the bulk of your diet. Foods such as milk and meat are modest in calories, especially if you choose low-fat or lean versions. At the other end of the calorie spectrum lie fats and processed foods, both of which are loaded with calories. As demonstrated in this chart, vegetables and fruits are calorie bargains, while fat-laden candy bars and sugar-laden sodas are calorie excesses. Processed foods tend to be high in calories because fat and sugar are frequently added in processing. Calories add up fast when fat is added because it packs more than twice as many calories as protein and carbohydrates. The excessive amount of sugar added to some foods gives them a calorie overload, too. Most foods contain a combination of carbohydrate, protein, and fat. Here's where the calories you eat come from:

The Second Tenet: Be More ActiveBeing more physically active is another way to tip your calorie-balance scale toward weight loss. Physical activity burns up calories, and it boosts your metabolism by revving up your internal engine and keeping it going at a higher rate for some time after you've stopped the activity. And physical activity, particularly strengthening activities, builds lean muscle tissue, which burns more calories than fat. The more muscle you have, the faster you burn calories, even when you're at rest.

The Third Tenet: Making Wiser Food ChoicesCutting back on calories in order to lose or control weight does not mean sacrificing good nutrition. It just means you need to use your calories wisely by making the best food choices, which are those that provide the most nutrients for the least number of calories.

Foods that are low in calories and brimming with vitamins, minerals, and other beneficial substances are considered "nutrient-dense." Nutrient-dense foods are the preferred choice. They provide nutrients needed for optimum health while allowing you to manage your weight.

To have a weight-loss and weight-maintenance routine that you like well enough to live with for years to come, you need to adopt a balanced eating pattern. A balanced pattern includes foods from each food group, because they each provide different nutrients. A balanced plan incorporates a combination of the three energy-providing nutrients: carbohydrates, protein, and fat.

Severely restricting any one of these categories or food groups not only leads to health problems over the long term, but it also sets you up for weight-loss failure. In the next section, you'll see how to balance your nutrients to keep you running strong while staying slim.

Tips are reprinted with permission of Food Insight, a publication of the International Food Information Council Foundation, 2003.

What Is Kefir and Is It Good for You?