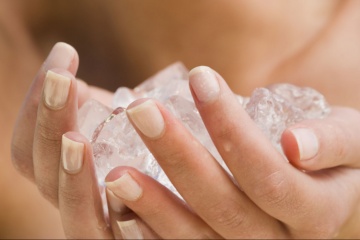 You may not even realize that you're consuming large quantities of ice. If you're grabbing it by the fistful, you're probably consuming more than the average person.
© Jupiterimages/Pixland/Thinkstock

Chewing on ice will give you more than just the chills; all that crunching, it turns out, is bad for your mouth -- the habit can injure soft tissue (such as your gums) and has been known to break or crack teeth.

Being anemic means your body has an abnormally low number of red blood cells, and it happens for a couple reasons: Either the body isn't making enough -- which it normally does daily, as an individual red blood cell only lives for about 3 months -- or the body is losing or destroying healthy red blood cells at a faster-than-normal rate. Red blood cells carry an iron-rich protein called hemoglobin, which delivers oxygen throughout the body. Without a big enough delivery service in place, your organs and tissues end up with a smaller amount of oxygen. While some people might not have any symptoms or only a few minor complaints, anemia can make you feel tired, dizzy and easily fatigued. People with anemia may also suffer from shortness of breath, an irregular heartbeat, headaches, leg cramps and insomnia, and often complain they have difficulty concentrating.

There are many types of anemia, more than 400 in total, and each specific type has its own cause and its own symptoms that go beyond those most commonly associated with the general condition. Sickle cell anemia, for example, is an inherited blood disorder. Other forms may develop because of a nutritional deficiency, such as the lack of vitamin B12 or iron. Symptoms of vitamin B12 deficient anemia may involve clumsiness, tingling sensations in your hands and feet (like pins and needles when a hand or foot falls asleep) and even depression and hallucinations. And iron isn't just what makes our blood red, rather than blue or green; it's critical to the makeup of a healthy red blood cell. Adults have between 3 and 4 grams of iron circulating throughout the body at all times, or they should; when iron levels drop too low, the red blood cell production line stops, leading to iron-deficiency anemia. This type of anemia, compared to other forms of the condition, is known to cause a red, sore tongue (glossitis) and an inflammation on the inside of your mouth (stomatitis), as well as cracks at the corners of the mouth (angular cheilitis) [source: Johnson-Wimbley]. Iron-deficiency anemia is also the type associated with crunching on ice.