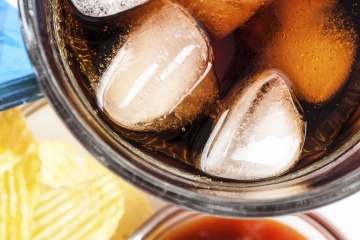 Crunching on the ice from your soda isn't a cause for concern, but if you compulsively eat large quantities of ice, it could be a symptom of a medical issue.
© yalcinsonat1/iStock/Thinkstock

Iron-deficiency anemia, which affects about 7 percent of American women and 2 percent of American men, may also cause you to crave some unusual things. A French study found that 44 percent of patients reported regularly eating non-food stuffs, such as clay, ashes or starch, compared to only 9 percent of people without anemia [sources: Gordon, Bowerman]. And you guessed it -- the most common craving was for ice.

Compulsively craving and eating non-food items for a period of at least a month or more is called pica, and when it's ice you crave it's known specifically as pagophagia. This type of ice eating goes beyond crunching a cube or two from your drink on a hot summer day -- pagophagia is the regular consumption of a sizable amount of ice.

It was in the late 1960s when a correlation was made between iron-deficient anemia and abnormal ice cravings, when it was observed patients' ice-eating symptoms resolved when the iron levels in their blood (those are your serum iron levels) rose into the normal range [source: Reynolds]. It was once thought that people with pica were perhaps compensating for a nutritional deficiency in their diet, but today the theory is outdated (plus, since ice doesn't contain any iron, it's a moot point in this instance); currently it's unknown why iron-deficient people may crave ice, or why most cases of pica develop in general. It's been theorized that some ice eaters may like the cooling relief that the ice brings to any mouth inflammation or fissures symptomatic of this form of anemia, although some individuals with the condition report they feel compelled to satisfy their need to chew on crunchy, icy things.

Luckily, iron-deficiency anemia is treatable; increasing how much iron is in your diet as well as daily supplements are enough to resolve and reverse the condition. And when the nutritional deficiency is gone, so is the pagophagia.

Author's Note: Why does anemia make people want to crunch on ice?

It's pretty cool to see how if you're paying close enough attention, a personal habit (or compulsion) such as crunching on the ice in your drink may be indicative of something deeper -- and important -- going on inside your body.