Should you really chew your food 32 times before swallowing? 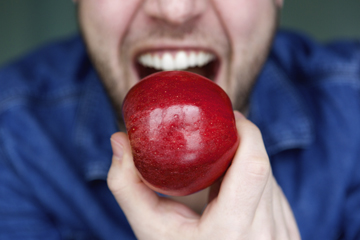 Taking your time masticating your morsels might be good for your health.
m-imagephotography/ThinkStock

You've turned over a new leaf at work -- and it just happens to be lettuce. Instead of scarfing lunch hunched over your keyboard, you're taking an actual midday break. Although it feels a bit strange to be eating food from a plate at a table (using a fork!), you're determined to persevere. You've even decided to take your mom's advice and chew each bite of food 32 times before swallowing.

You can't quite recall why this dedicated effort at numerical chomping is supposed to be good for you. Maybe it aids digestion or helps you feel fuller, sooner. Whatever the reason, you might as well give it a try. Maybe you'll even call Mom later and offer a long overdue "thank you" for the words of wisdom.

But it wasn't your mom who came up with the idea. In fact, it wasn't anyone's mother. The credit for the "slow chew" movement goes to a Victorian-era industrialist named Horace Fletcher. In the late 1800s, he began spreading the word about "Fletcherism," a specific method of eating. He penned "Fletcherism: What It Is," a book outlining his theory that chewing food into teeny, tiny bits will help your body better absorb it. In addition, Fletcher postulated that if peopled chewed their food until it liquefied, they would eat less food, buy less food and save more money.

Fletcher, a successful British tycoon with influential friends ranging from Thomas Edison to John D. Rockefeller, tirelessly encouraged others to chew up to 100 times per minute or until a bite of food transformed to liquid. Then, he reasoned, the chewer could either swallow the food or spit it out. It's no wonder his nickname was "The Great Masticator" [sources: Christen, Fletcher].

Until his death in 1919, Fletcher traveled across England, Northern Europe and the United States, teaching "the more you chew, the less you eat." During World War I, he even used his appointment to an international committee to show 800,000 starving people in Belgium how to chew more thoroughly so the nutrients in their food would be more thoroughly absorbed [source: New York Times].

This food ingestion method may have seemed like a long shot for a starving population, but recent research reveals there are real benefits to spending more time chewing your food. In 2009, researchers at Purdue University in West Lafayette, Indiana, asked study participants to chew almonds 10, 25 or 40 times. The result? The more the participants chewed the almonds, the faster the nutrients were absorbed into their systems, leading to better maintenance of energy levels [source: Cassady et al.].

Chewing more can also make you eat more slowly, and this has benefits all its own. According to a 2014 study conducted by researchers at Texas Christian University in Fort Worth, Texas, when people eat more slowly, they consumer fewer calories [source: Meena et al.]. It's definitely food for thought as you eat a leisurely lunch. Even if your mom didn't invent the idea, maybe you'll still call to say "thanks" -- once you're finally finished chewing, that is.

10 Most Absurd Fad Diets
What's the Worst Fad Diet Ever?
Why does pregnancy cause you to fart more?