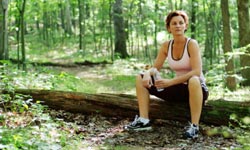 Imagine jumping in a pick-up game of basketball with some neighborhood friends, playing as hard as ever. It's summer, and the weather is hot and humid.

Thirty minutes later, you're exhausted. You look around for a bottle of water and realize you forgot to bring one. In fact, you haven't had anything to drink for hours.

Your heart's racing, you're sweating more than usual and feeling slightly dizzy. You also feel nauseous.

It's possible you have heat exhaustion.

Heat exhaustion occurs during prolonged exposure to high temperatures, and often leads to excessive sweating and dehydration. It's one of several conditions that fall under the broader umbrella of heat-related illnesses, the most serious of which is heat stroke [source: UMMC].

Though not inherently deadly, heat exhaustion's ability to escalate is the primary reason to take the condition seriously.

So what happens to the human body during heat exhaustion?

When a person is exposed to higher-than-normal temperatures, his or her body will sweat as a cooling mechanism. But if a person sweats too much without replacing the water and vital nutrients, dehydration kicks in and the body can't keep up with its rising temperature. This is doubly dangerous in humid weather, where sweat evaporates slower, delaying cooling off of the body [source: CDC]. When the body can no longer control its temperature, the effects of heat exhaustion kick in [source: UMMC].

As we've pointed out, keeping heat exhaustion in check is essential in preventing heat stroke.

In this article, we'll look at five supplements that assist the human body in both warding off and recuperating from heat exhaustion.

But first an important note: Water, water, water. Though not a supplement on this list, water is the most important thing a person should consume when overheated. Drinking cool water both replaces that lost to sweating and assists in bringing down your core body temperature. Just make sure it's not too cold to avoid stomach cramps [source: CDC].