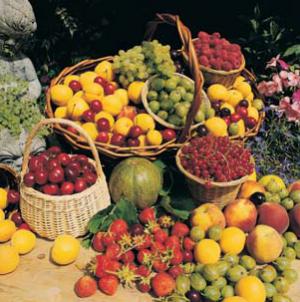 Learn about carotenoids, precursors to vitamin A that can be found in yellow and orange fruits and vegetables.
Publications International, Ltd.

Carotenoids, the colorful plant pigments some of which the body can turn into vitamin A, are powerful antioxidants that can help prevent some forms of cancer and heart disease, and act to enhance your immune response to infections.

These precursors to vitamin A are sometimes called provitamin A. Bright-orange beta-carotene is the most important carotenoid for adequate vitamin A intake because it yields more vitamin A than alpha- or gamma-carotene.

Some carotenoids, such as lycopene, do not convert to vitamin A at all. Lycopene, the orange-red pigment found in tomatoes and watermelon, is still of value, however, because it's an antioxidant even more potent than beta-carotene. The other carotenoids are also valuable antioxidants. Antioxidants help the body reduce the inflammatory action of singlet or free-radical oxygen. Oxygen atoms like to combine into pairs. Singlet oxygen atoms are unstable and interact with the lipids found in cell walls causing inflammation and damage. Sometimes, your own body uses these free radicals to fight infections and abnormal cells. Most of the time, these free radicals cause inflammation and damage to cells, such as those that line your arteries.

Orange and yellow fruits and vegetables have high vitamin A activity because of the carotenoids they contain. Generally, the deeper the color of the fruit or vegetable is an indication of a higher concentration of carotenoids. Carrots, for example, are especially good sources of beta-carotene. Green, leafy vegetables such as spinach, asparagus, and broccoli also contain large amounts of carotenoids, but their intense green pigment, courtesy of chlorophyll, masks the tell-tale orange-yellow color. (See the table on page 194 for a list of good food sources of vitamin A.)

Most other carotenoids, such as alpha- and gamma-carotene, plus cryptoxanthin and beta-zeacarotene have less vitamin A activity than beta-carotene, but offer ample cancer prevention. Some carotenoids, such as lycopene, zeaxanthin, lutein, capsanthin, and canthaxanthin are not converted into vitamin A in the body. But again, they are powerful cancer fighters, prevalent in fruits and vegetables. There is abundant evidence that lycopene in particular helps reduce the risk for prostate cancer.

Carotenes are valuable preventive medicines, too. Research shows that people who eat a lot of foods rich in beta-carotene -- the carotenoid with the greatest vitamin A value -- are less likely to develop lung cancer. Even among smokers, lung cancer is less likely to occur in those people who eat a diet that includes lots of vegetables and fruits containing beta-carotene. Taking a beta-carotene supplement in pill form does not always have the same effect, however. Perhaps this is because in these foods there may be other substances that offer protection as well. In three studies involving 69,000 participants, many of them smokers, beta-carotene supplements increased the rate of lung cancer. Lutein/zeaxanthin, lycopene and alpha-carotene show evidence of being significantly more protective against lung and some other cancers.

Many experts now believe that the protective effect of carotenoids depends on the timing of when you take them. If you take betacarotene before your cells have undergone any pre-cancerous changes, the antioxidant action of the carotenoids can help reduce the likelihood that any mutations will take place. The carotenoids at this point can prevent free radicals from damaging cells and the DNA inside of cells, both of which can start cancerous growth. But if you take supplemental betacarotene AFTER cells have already mutated, the beta-carotene may protect the mutated cells from being destroyed by your own immune system.

Some of the most potent cancer fighting cells in your body utilize free radicals to fight infections and to destroy precancerous cells. So eating foods high in carotenoids or taking supplements helps with what is called primary protection from cancer - cancer never gets started. But after you have a growing colony of cancerous cells in your system, betacarotene supplements may prevent your own system from fighting the cancer, making carotenoid supplementation significantly less safe for what is called secondary prevention - stopping a recurrence of cancer.

In addition to their role in cancer prevention, the carotenes offer us protection from heart disease, too. Again, it's their antioxidant behavior that protects the lining of the arteries and the fats in the blood from free radicals' oxidative damage. And age-related macular degeneration of the eye, which leads to vision loss, may be counteracted by carotenes' antioxidant power.

Beta-carotene is used to treat skin problems caused by sun exposure. Some people have conditions in which swelling, redness, itching, and pain occur after being in the sun. Typically this is the result of excessive free radical damage due to a cellular problem. Beta-carotene supplementation helps alleviate these symptoms by protecting cells from damage.

Carotenes, like vitamin A, support immune function, but in a different way. They stimulate the production of special white blood cells that help determine overall immune status. They improve the communication between cells, too, which results in fewer cell mutations. White blood cells attack bacteria, viruses, cancer cells, and yeast. Women with high levels of carotenes in their blood tend to have fewer incidences of vaginal yeast infections.

While the liver stores retinol, excess carotenoids accumulate in the fat just beneath the skin. If you eat a lot of carotene-rich foods, you may notice a yellowing of your skin, especially on the palms of your hands and soles of your feet. This is generally considered to be harmless, though carotene-containing tanning pills used in Europe reportedly cause infertility in women.

Taking more than 100,000 IU betacarotene per day sometimes gives the skin a yellow-orange hue, which may look like jaundice but is not harmful. People taking beta-carotene for long periods of time should also supplement with vitamin E, as beta-carotene may reduce vitamin E levels. Supplementing with doses of over 50,000 IU of beta carotene may also decrease blood levels of lutein, lycopene and other carotenoids.

Vitamin A and carotenoids are vital to your overall health, especially for good eyesight. Just be sure you're getting appropriate amounts of this nutrient and safeguard against overdose to avoid toxic levels, and vitamin A will work to keep your body running smoothly.

What is canola oil?
How does dietary fat help us absorb vitamins?
Checking Food Labels