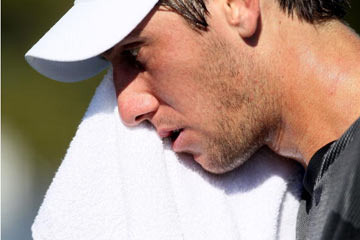 Carsten Ball of Australia wipes the sweat from his face during his first-round singles match at the 2010 U.S. Open. He's wiping away some sweat from the apocrine sweat gland -- that's the smelly kind. See more men's health pictures.
Chris McGrath/Getty Images

If teachers still showed hygiene films in health class, millions of pubescent students would be advised to bathe frequently as a way to battle increasingly common bouts with body odor. Turns out, there's a physiological reason for our propensity for stinkiness in the teenage years and beyond -- and it all has to do with apocrine sweat glands.

That's because apocrine sweat glands are found in the places where we have the most hair follicles (the scalp, armpits and groin) and they produce plentiful meals for bacteria. In fact, apocrine glands are one of two types of sweat glands found on mammals. The other type, eccrine glands, is designed to secrete odorless perspiration laced with salt and electrolytes. However, apocrine sweat glands release a fat-infused liquid that, when pushed to the surface of the skin, is eaten by bacteria. And that's where the odor comes into play [source: Mayo Clinic].

So, other than staying fresh with some good ol' soap and water, what else do we need know about apocrine sweat glands? Plenty. These glands can be the sites of some pretty serious medical conditions, at least one of which is on the rise. We'll sort out the inner workings of apocrine sweat glands, next.

Apocrine glands form in utero, but don't go into action until puberty when they receive cues from all the hormonal stimulation taking place. Although the apocrine glands continually release sweat, they kick into high gear every time emotional stress occurs. In fact, the more you experience emotional stress, the more your apocrine glands contract and release sweat [source: Britannica]. The amount you sweat is, aside from emotional triggers, probably hereditary. Still, it can be influenced by other factors, such as your consumption of caffeine, alcohol or spicy foods. Some over-the-counter drugs, including aspirin, can cause excessive sweating [source: Weil].

What does this have to do with hair follicles? They play a central role, acting as straws through which sweat is transported from an under-the-skin factory to the surface. Here's a play-by-play: From deep within the skin, apocrine glands release sweat from a coiled tube into a straight tube-like duct that ascends toward the hair follicle. This duct contracts until it has squeezed the sweat into the hair follicle. Once there, the sweat empties into the isthmus, which is the part of a hair follicle directly underlying the skin [source: Baker]. The sweat is then released from the hair follicle onto the skin's surface. Knowing the relationship of apocrine sweat glands to hair follicles makes it easy to understand where this type of gland congregates: wherever hair follicles grow.

There are specialized versions of the apocrine gland, too. Although not quite the same, these first-cousin glands produce earwax and, in the case of the female gender, breast milk. We should also point out apocrine sweat is quite different from the mostly water sweat secreted from other glands; it's fatty and has the potential to be quite odiferous. We'll explain why on the next page.

As the sweat from apocrine glands travels up the hair follicle to reach the skin, commonly occurring bacteria begin to break it down. As the bacteria eat the fatty sweat molecules, it causes the previously odorless sweat to smell. Thankfully, there are a number of simple remedies.

In addition to bathing on a regular basis, remember to slather on a little deodorant (you can use it in places other than armpits, by the way). Deodorant is designed specifically to combat the smell-production of sweat-feasting bacteria. You could also use an antiperspirant for good measure. The chemical compounds in antiperspirants cause sweat glands to swell and reduce the amount of sweat they produce, at least temporarily.

Unlike eccrine sweat, which is mostly water, apocrine sweat primarily contains sialomucin. This oily substance is comprised, in large part, of sialic acid -- the working components of milk and colostrum [source: NZP]. Understanding this relationship, even if we are talking about its miniscule molecules, makes it easier to see why apocrine sweat has a fat content more like milk than water. Plus, when it comes to one medical condition -- apocrine metaplasia -- the relationship between apocrine sweat glands and breast tissue becomes even more intertwined. We'll share all the details, next.

For a down-to-earth take on the fighting-bacteria front, try a deodorant with green tea extract, available at a health food store or dab rubbing alcohol on the armpits to reduce bacteria on the skin [source: Weil]. If you don't mind taking the risk that your smell will announce your presence to everyone, try a few short-lived remedies, such as baking soda or baby powder.

Although the term apocrine metaplasia certainly sounds sinister, it's not a medical condition that's life-threatening. An apocrine metaplasia refers to a lesion that occurs in the breast tissue that is, thankfully, benign. In fact, it's more common than most people realize, affecting far greater numbers of women than cancerous lesions ever do [source: Guray]. In fact, apocrine metaplasia has been discovered in about 90 percent of all women autopsied [source: Sanders].

The lesions, or cysts, are comprised of firm white fibrous tissue and may become tender at various times throughout the menstrual cycle. There are no clear-cut reasons why they occur, but it's thought an excess or shortage of estrogen or progesterone is to blame [source: Sanders]. Beginning at about age 20, women have increased odds of developing these cysts. By about age 40, the frequency drops off dramatically [source: Guray].

Apocrine metaplasia legions aren't typically associated with breast cancer or an increased risk of developing breast cancer. And, because they can be diagnosed with medical technology such as ultrasound, mammography or magnetic resonance imaging, there's also no need to surgically remove the benign cysts for further testing [source: Guray]. There is a school of thought, however, that apocrine metaplasia could progress into cancer, or at least reflect a propensity for the disease [source: Washington]. In most medical communities, this hypothesis is in the minority.

When it comes to extramammary Paget's disease, however, there is a direct link to cancer. We'll explain more about this condition on the next page. 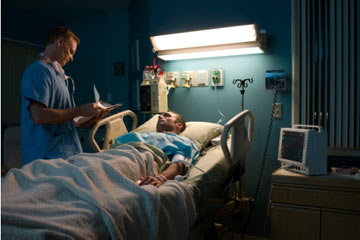 A rash on the genital area could be a sign of extramammary Paget's disease, which affects both men and women.
Thomas Northcut/Digital Vision/Thinkstock

Any type of rash on the genital area is cause for concern, especially when it comes to extramammary Paget's disease. That's because this disease -- which can clearly be seen on the top of the skin -- sometimes signals an underlying cancer. The skin lesions associated with extramammary Paget's are found most often on the vulva in females, near the scrotum and penis shaft in males, or near the anal area on either gender. The skin sores are usually itchy and scaly (like dry skin), but can become red and crusty over time. And, when a topical steroid cream fails to clear up the dry patches, it becomes obvious the sores aren't from eczema. Plus, the sores don't crop up overnight. In fact, these indicators of extramammary Paget's can take years to develop and the appearance of an underlying cancer can, too. In some cases there may be signs of extramammary Paget's for more than a decade before cancer develops [source: DermNetNZ].

So what does this have to do with apocrine sweat glands? Plenty. Turns out these glands, which are in high numbers in the genital region, have a direct link to extramammary Paget's disease [source: Mazoujian]. While only about 25 percent of the people who have extramammary Paget's disease will also develop cancer, those deadly cells will originate from one place: the apocrine sweat glands. Of those diagnosed with an underlying cancer, about half will die -- despite treatment [source: Sandhu]

The treatment for extramammary Paget's is surgical removal of the lesions and underlying tissue, which presents a problem if they've spread throughout the genital region. Unfortunately, despite surgery, extramammary Paget's often makes a comeback, so frequent check-ups are the norm [source: DermNetNZ]. And, this isn't the only type of cancer that originates in the sweat glands. There's another very rare but deadly form, and we'll share the details, next.

Apocrine carcinomas occur anywhere apocrine sweat glands are found, so it's easy to see what parts of the body are at risk -- just look for the hair follicles. The scalp is a particularly common site of the cancer, which originates from the apocrine sweat glands. However, the cancer can crop up on the genitals, arms or any other place hair follicles grow from the skin [source: Chintamani]. Although less commonly, the term apocrine carcinoma is also used to refer to a rare form of breast cancer that forms in the ducts and makes its presence known with apocrine secretions [source: Japaze].

Apocrine carcinomas first appear as firm cysts right under the skin, which has usually turned red or purple in that distinct spot. There may be one cyst or many. The problem, especially when it comes to treatment, is that it's easily spread from this localized area to the lymph system, and then throughout the body. So, not only does the cancer eat away the tissue near the apocrine glands where it first appeared, but it can do some serious damage in other regions of the body as well. For example, even if an apocrine carcinoma develops in the armpit, it can send cancerous cells to the brain [source: Chintamani].

This isn't usually a young person's disease. In most cases, apocrine carcinoma is diagnosed in older adults. Fortunately, however, it is exceedingly rare. Fewer than 40 cases have been reported worldwide [source: Chintamani]. However, recent research suggests this type of cancer is on the rise in the U.S. An aging population with a lifetime of ultraviolet sun exposure may be to blame [source: Donaldson-Evans].

In the end, apocrine sweat glands offer more to consider than a few basic hygiene rules. Although not visible to the naked eye, these tiny glands can cause big problems if something goes awry.