Why do I get sweat bumps? 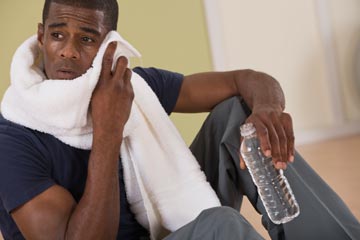 To avoid getting sweat bumps, don't take your daily jog during the hottest part of the day, but do wear clothing that wicks moisture away from the skin's surface. Sweat bumps are usually found in spots where clothing rubs against the skin. See more men's health pictures.
iStockphoto/Thinkstock

If you've ever spent a few hours in the heat and humidity only to be rewarded with a bumpy rash, then you've probably had a close encounter with sweat bumps. Sweat bumps -- also known as heat rash, prickly heat or miliaria -- aren't dangerous to your health, but they can be annoying. That's because the red bumps that form on skin around your neck, back, groin, armpits or abdomen occur when excessive sweat damages surface cells and traps liquid beneath the skin. What follows is an admittedly irritating pattern: The bumps swell, burst and release sweat that stings surrounding skin.

In adults, sweat bumps are usually found in spots where clothing rubs against the skin. Babies, who are more prone to sweat bumps than adults because they have underdeveloped sweat ducts, often get a mild form of heat rash around the neck, shoulders and chest known as miliaria crystallina. There are two other types of sweat bumps, miliaria rubra and miliaria profunda. Both have more intense symptoms, such as stinging and itching. Miliaria profunda, in fact, is where the common term "sweat bumps" comes from; the most serious kind of heat rash, it prompts goose-bump like lesions to form on the skin.

Hot, humid weather isn't the only culprit at work, though. Anything that makes you sweat, like jogging or gardening, can put you at risk for sweat bumps. Certain fabrics, particularly those that keep sweat trapped close to the skin, can cause a rash. Heavy lotions or creams may have the same effect. Plus, heat rash has been traced to some attention-deficit hyperactivity disorder or acne medications.

Unless you've scratched the bumps and caused the weakened tissue to become infected with bacteria, there's really no need to visit the doctor. With time and cooler temperatures, sweat bumps usually go away on their own (although it may take about a week). However, remaining in a hot environment puts you at risk for heat exhaustion. That's because your blocked sweat ducts don't cool the body as they normally would.

If your case of sweat bumps is severe enough to drive you to distraction, a doctor may prescribe a topical steroid. Most of the time an over-the-counter remedy, such as calamine lotion, will do the trick. You should also consider a few preventive measures, even if you've already decided not to take your daily jog during the hottest part of the day. Clothing that wicks moisture away from the skin's surface is a safe bet. Applying anhydrous lanolin -- a natural, no-water-added moisturizer collected from shorn sheep fleece -- can help prevent sweat ducts from becoming blocked in the first place.

Keep in mind, heat rash isn't only reserved for warm weather. It can happen in cold climates, too. Sleeping with an electric blanket or cocooned in a heavy comforter aggravates sweat ducts. So does sleeping in a room with a zealous heater. And forget taking a too-hot bath topped off by a slathering of perfumed lotions (unless you don't mind a little heat rash, that is).

Do men go through menopause?
Why does anxiety cause underarm sweat?
Why do I sweat so much?