How to Get Rid of Foot Odor 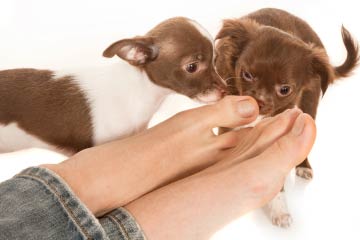 Dogs like to sniff feet no matter how they smell ... but people don't. See more men's health pictures.
iStockphoto.com/Anyka

After a long day at the office, there's nothing like coming home, changing into a comfy T-shirt and sweatpants, and taking off your shoes. Or, you might be the kind of person who likes to slip off your shoes under your desk or during long meetings. It only makes sense; when your feet are clad in socks and (possibly uncomfortable) shoes all day, it's natural to want to give them some air and wiggle room. And when the weather warms up, it feels wonderful to bare your feet in open-toed shoes, sandals or flip-flops.

You probably wouldn't give a second thought to exposing your feet in any of those ways, and nobody around you would think anything of it, either. Feet aren't the most attractive part of the body, but as long as yours appear clean and well-groomed, that's all that matters. However, the prettiest pedicure or cutest socks make no difference if your feet stink. You might not even be aware of it until your significant other -- or, even worse, a friend or colleague -- points out that there's a distinctly foul smell in the air emanating from your feet.

Maybe they just wrinkle their noses, and it's taken you a while to figure out that your foot odor is the cause. Now what are you supposed to do? Keep your shoes on forever when you're around other people? Never wear sandals again? That would work, but you probably wouldn't be very happy sitting around your house, or the beach, with shoes on all the time.

Foot odor can be embarrassing, and getting rid of it might not be as simple as just rubbing on some antiperspirant. However, there are lots of different things that you can try. Read on to find out what causes that stench in the first place. Knowing why you have this unfortunate problem can help you figure out how best to get rid of it.

As you might imagine, foot odor is usually caused by sweaty feet. But it's a little more complicated than that.

Foot odor is different from other types of body odor. Most body odor emanates from the genitals and armpits, which contain apocrine sweat glands. The rest of the body, including the feet, is covered with eccrine sweat glands. What's the difference? All sweat is basically odorless, but the sweat from apocrine glands contains protein and amino acids that feed bacteria living on the skin. The bacteria generate body odor.

Sweat from eccrine glands, on the other hand, is watery and thin. It tends to evaporate pretty quickly and doesn't usually cause a smell. But your feet have about half a million of the body's 2 to 5 million sweat glands, so there's a higher concentration of sweat. Some researchers believe that this evolved back when we walked around barefoot all of the time, and the constant contact with the ground meant that our feet got hotter and needed more sweat glands to stay cool. The sweat just evaporated off bare feet.

Today, when your feet sweat, you're usually wearing socks and shoes, and the sweat gets trapped inside. Bacteria are to blame, but unlike with other types of body odor, the bacteria on your feet don't feed on sweat. One culprit is Brevibacterium linens. This bacterium lives on your feet because it likes to eat the dry, dead skin. It also thrives in warm, moist environments -- like sweaty socks. When the Brevibacteria eat, they break down an amino acid into a gas. That gas, methanethiol, has been described as smelling like rotten eggs or cabbage. If your foot odor is more vinegary, it might come from Staphylococcus epidermis. This bacteria eats another amino acid found on the skin and produces isovaleric acid. When either -- or both -- of these bacteria go crazy, the result is stinky feet.

Now you know why you have foot odor. Next, we'll look at ways to get rid of it.

Brevibacterium is also responsible for the pungent odor and taste of rind-washed cheeses like Entrammes, Muenster and the famously stinky Limburger.

Getting rid of foot odor means dealing with two different issues: bacteria and sweat. We always have bacteria on our skin, but you can help to keep those odor-producing bacteria at bay by washing your feet with an antibacterial soap. It's easy to neglect your feet (and focus on those other, more odor-producing areas of the body), so wash them well and make sure that you dry them thoroughly. You may also want to consider using a pumice stone in the shower to slough off the dry, dead skin on your feet. Along with keeping your feet moisturized, this step will mean less food for the Brevibacteria.

There are lots of things you can do to keep your feet dry. Start by limiting the amount of time that you wear shoes made out of synthetic materials, which don't allow air to circulate as well as natural materials like leather or canvas. The same goes for socks -- try to wear socks made out of wool, cotton, hemp or bamboo. Always put on clean ones, and consider changing them once during the day. You should avoid wearing the same pair of shoes all the time, too. When you get home and take off your shoes, don't just throw them in your closet -- leave them out overnight to dry, and wash them occasionally if possible. Open-toed shoes and sandals let your feet breathe and will actually cut down on odor when your feet are clean, dry and cared-for. Antibacterial, odor-absorbing foot powders, sprays and shoe inserts can also help to keep your shoes and feet dry and odor-free. Finally, you can try using the same antiperspirant that you use on your underarms.

One -- or all -- of these foot odor remedies should have you no longer worried about shedding your shoes. But if you still have bad foot odor, you may need a stronger remedy such as a prescription antiperspirant or even Botox injections. Severe foot odor can also be a sign of a more serious foot problem, and you'll need to see your doctor or a podiatrist.

Try soaking your feet in a tub of lukewarm tea -- the tannic acid will have a drying effect. So will soaking your feet in Epsom salts. You can also make your own foot powder by mixing one tablespoon of baking soda with a few drops of an essential oil (such as clove, lavender or tea tree) until well blended. Sprinkle the powder on your feet and in your shoes. The baking soda is absorbent and creates an alkaline environment, which is less hospitable to bacteria. Essential oils not only smell good, they also have antibacterial properties.