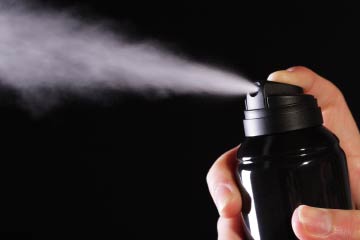 One contender in the battle against sweat -- and stink. View more men's health pictures.
iStockphoto.com/SychuginaElena

Deodorant use has been traced back to the ancient Sumerians, who also developed the world's first written language -- and the wheel [source: Patrick]. The first modern, mass-produced deodorant, a cream applied by hand to the underarms, started improving social lives in 1888.

By the 1950s, Americans were using roll-on deodorant (with an applicator similar to that of a ballpoint pen), and hand-dabbing our pits with cream was quickly becoming a thing of the past. Aerosol-spray deodorants followed about 10 years later, and stick deodorants came along in the 1970s, mixing deodorant with waxes, fats and emollients to form a solid bar packaged in a plastic, hand-held container.

Unfortunately, the chemical propellants once commonly used in aerosol deodorants -- chlorofluorocarbons (CFCs) -- released chlorine into the atmosphere that destroyed ozone, which helps protect us from the sun's ultraviolet radiation. As of 1994, use of CFCs in aerosol sprays has been banned (though the atmosphere won't recover from our use of CFCs until 2050 or so) [source: EPA]. Manufacturers now use safer, alternate propellants.

So which is better -- roll-on, spray-on or stick deodorants? It really depends on personal preference. Spray deodorants tend to dry quicker under the arm than other deodorants. After spraying each pit for a couple seconds, you can generally flap your wings a few times and you're good to go. After using a roll-on or stick, however, you better use caution to prevent armpit-shirt contact when putting on that black T-shirt, or else you're going to be sporting white tiger stripes on it.

On the other hand, nobody likes to stand next to someone who's spraying deodorant all over the place. And people using spray deodorant aren't too thrilled when they take a deep breath of aerosol spray.

In an age of heightened airport security, gel and spray deodorants must be small in size (less than 3.4 ounces) and sealed in quart-sized baggies. Sounds like a pain when you can bring along a stick deodorant of any size you want, sans bag [source: TSA]. Land-tethered humans will just have to try all three types of deodorant to see what they like best, but for those staying dry in the sky, stick is the way to fly.