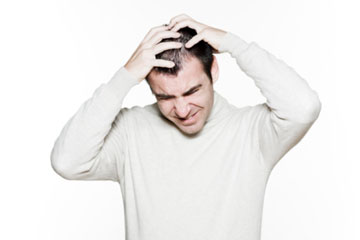 Morgellons patients often feel as though bugs are crawling underneath their skin. See more pictures of skin problems.
Hemera/Thinkstock

In 2002, baseball pitcher Billy Koch was at the top of his game. Playing for the Oakland Athletics, his game-winning fastball could top 100 miles per hour (161 kilometers per hour). It's no wonder predictions of his continued future as a major league player grew louder and louder. Until Koch came up against a nearly invisible opponent, that is.

Just as his career seemed certain to catapult him to fame, Koch began losing sleep over twitching muscles. Then, small multi-colored wires seemed to ooze from sores on his skin. He went to doctors, who either dismissed the unsettling symptoms or offered only temporary solutions. After two years of battling the slow-healing sores and never-ending fibers, Koch was forced to hang up his baseball cap. He was only 29 years old [source: Fowler].

Koch's health concerns may sound more like science-fiction than science, but there are growing numbers of people in the United States who claim to have bugs crawling under their skin and wiry fibers sprouting from their bodies. They call the condition Morgellons Disease, and it's been blamed on everything from nanotechnology to nematodes. So far, no one has been able to explain its cause or even how to treat it.

Morgellons, also referred to as unexplained dermopathy or fiber disease, is a collection of symptoms that primarily involve the skin. People who have been affected report the sensation of bugs crawling, stinging or burrowing under the skin. Fibers -- single or multi-colored stiff threads -- or black granules are also reportedly found on or beneath the skin [source: CDC]. An array of other symptoms -- such as forgetfulness, aching joints or chronic fatigue -- also go hand-in-hand with Morgellons. What's more, there are those who believe the disease isn't a physical malady at all. Could the physical signs of Morgellons really be caused by mental illness?

Up first, we'll take a look at how Morgellons came to be in the spotlight.

The mysterious disease now known as Morgellons went unnamed -- and largely unnoticed -- until 2002, when a Pennsylvania woman named Mary Leitao began researching her 2-year-old son's troubling skin problems [source: Chertoff]. The boy said "bugs" when pointing to fibers that continually sprouted from his lips [source: Schulte]. She christened the malady "Morgellons," a name plucked from a reference to wiry hairs sprouting from the backs of children that she discovered in an obscure 17th century French medical text. By 2002, she'd launched a Web site that galvanized a growing number of people experiencing equally unsettling symptoms. And in 2004, she founded the Morgellons Research Foundation, a nonprofit group to raise awareness and funding for the condition [source: Harlan].

Not long after, Randy Wymore, a pharmacology and physiology researcher at Oklahoma State University with a penchant for pinning answers on the unknown, began collecting and studying samples from people who said they had the fibers erupting from their skin [source: Harlan]. The pet project grew in scope, but Wymore still couldn't determine what the fibers were made of. They aren't a manmade material, like fiberglass, or a plant-based material [source: Stobbe]. In fact, researchers still don't know what the fibers are; they don't even match anything in the FBI's national database [source: ABC News].

People continue to populate the Morgellons Research Foundation Web site, which has become the primary registry for those reporting symptoms. The disease seems to affect middle-aged women most often, but men and children also report symptoms. Many say the disease seems to spread through families in close contact [source: Schulte]. To date, more than 14,000 people (who've dubbed themselves "Morgies") consider themselves carriers of the disease. Still, it's difficult to track the number of actual cases. That's because people with the symptoms must diagnose themselves; the medical community doesn't recognize Morgellons as a disease -- yet.

In September 2009, the Centers for Disease Control and Prevention (CDC) -- which receives about 1,200 annual inquiries from those with Morgellons -- wrapped a yearlong investigation on the condition [source: Chong]. The CDC currently is studying the data, but as of May 2010, a date had not been set to release the results.

The CDC investigation was designed to catalog symptoms and gather information about the people who report having Morgellons. Northern California was selected as a study site because of its greater-than-average number of cases [source: Templeton]. Other areas with Morgellons clusters include Florida and Texas, but Morgellons has been reported in every state, as well as Asia, Europe and Australia [source: Witt].

For those who believe they wage a daily battle against Morgellons symptoms, the CDC study offers hope. We'll explore their troubling symptoms on the next page.

Morgellons Symptoms: An Itch That Can't be Scratched

Before they seek treatment for Morgellons, most people with these puzzling symptoms simply wonder what it is. Sores that seem to ooze wiry hairs sound bad enough. But when your doctor and the FBI can't identify the cause, it can turn an unsettling situation into an alarming one.

Many people who say they have Morgellons describe a feeling like insects are burrowing underneath their skin. And the skin lesions that accompany this feeling don't seem to discriminate; the sores cover any area of the body -- even parts a person can't easily reach on his or her own. Sometimes, fibers seem to erupt from the lesions, either as single strands or as twisted spherical balls of fiber. Some people describe having gritty-feeling granules on their skin or on the interior of their eyelids; a few believe the granules to be eggs laid by the bugs under their skin. Some awaken to bed sheets littered with black specks that have shed from their skin. There are reports of hair loss, vision loss and periodontal disease [source: Than]. Others have all, just one or a varied combination of these symptoms [source: Savely].

People are clearly dealing with something. The question is: What? The Morgellons mystery has a "chicken or the egg" riddle at its core. Is it a physical disease that drives people to develop psychiatric symptoms or the other way around [source: Savely]. Whatever the case, the symptoms can be so intense -- with such little relief -- that some have committed suicide [source: Williamson].

For those who do seek help for the itching and stinging sensations, as well as the skin lesions, there often aren't easy answers. Find out why on the next page.

Physicians and researchers searching for the cause of Morgellons symptoms often look for common exposures shared by people who believe they have the condition. So far, this includes everything from dirt and ticks to cotton socks and bottled water. Many people with Morgellons also test positive for the tick-transmitted Lyme disease [source: Ho]. It's also believed ticks may transmit bacteria that cause Morgellons-like infections [source: Ho]. As for cotton socks, these seem an unlikely cause. Sure, the fibers that protrude from skin sometimes look like lint balls, but they're not cotton [source: Stobbe]. And, if the bacteria at the root of Morgellons were being introduced in bottled water, as some believe, it likely would have reached epidemic proportions by now [source: Mortellaro].

Long before they officially become physicians, medical students are sometimes advised to beware the zip-close baggie. When it comes to patient care, it's usually a pretty good rule of thumb: If a patient comes to you for help and brings their symptoms in a baggie -- instead of on their body -- remain skeptical. And get ready to prescribe some anti-psychotic medication.

Unfortunately for patients who believe they have fibers growing out of their skin, this time-tested advice doesn't work in their favor. Those with Morgellons often collect and bring the fibers or black specks that flake off skin to the doctor in a desperate version of show-and-tell. Often, it's presumed the wounds are self-inflicted [source: Savely].

Many of those who report Morgellons-like symptoms to physicians are diagnosed with a psychosomatic illness such as delusional parasitosis [source: Savely]. Simply put, delusional parasitosis means a person believes there's a bug or other material coming out of their skin when in reality there is not [source: Than]. What about the sores and fibers? Although these seem to provide clear-cut evidence, they can be attributed to psychosomatic illness, too. The sores could be self-inflicted; the fibers, admittedly more difficult to explain, could be planted. A disorder like delusional parasitosis may start in the mind, but it can manifest itself with physical symptoms that are not imaginary [source: University of Michigan Health System].

Plus, some anti-psychotic medications do relieve the itching, which seems to confirm a delusional parasitosis diagnosis [source: Savely].

The problem is that if Morgellons is purely a physical malady, it isn't yet recognized by the medical community as a disease. And there aren't any currently known diseases or disorders that exactly match its combined symptoms [source: OSU]. What's more, the purported disease's symptoms overlap those of many other conditions, such as a simple dermatitis or Lyme disease [source: Than]. Sometimes, the physical treatment offered by the medical community is simply the most obvious one: "Just don't scratch it" [source: OSU]. But until researchers get to the root of Morgellons, few are certain how -- or even willing -- to treat it.

Want to learn about some other skin conditions and how to treat them? Check out the links on the next page.