by Sherry Kahn
NEXT PAGE 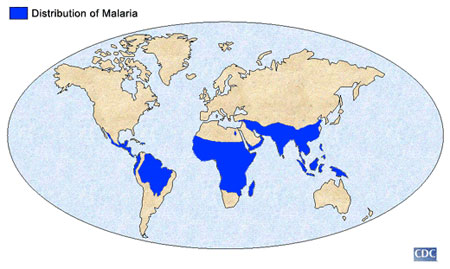 Malaria is a global crisis. This mosquito-transmitted disease affects about 300 million people each year, resulting in 1 million deaths. More than 90 percent of all cases occur in African countries, where it is the leading cause of death in children under the age of five. Today, the disease is a public health challenge, with 2 billion people in more than 100 countries at risk [Source: Roll Back Malaria Partnership]. It has re-emerged in areas where it was once eliminated due to a number of factors, including the parasite's increasing resistance to antimalarial drugs and insecticides.

Malaria is curable and preventable. In this article, you will learn about efforts underway to eradicate this serious disease and how you can protect yourself when you travel to countries where malaria is common.

International agencies, governments and non-governmental organizations (NGOs), community groups, foundations and research and academic institutions are engaged in a number of efforts to prevent and control malaria. Here are a few highlights:

The Roll Back Malaria Partnership (RBMP) is a coordinated global approach to fighting malaria. It was launched in 1998 by the World Health Organization (WHO), the United Nations Children's Fund (UNICEF), the United Nations Development Programme (UNDP) and the World Bank. Since its formation, the RBMP has expanded to including malarial-endemic countries, the private sector, nongovernmental and community-based organizations, foundations, and research and academic institutions.

RBMP's goal is to cut the malaria burden in half by 2010. Among its activities are mobilizing resources for malaria control and treatment, and supporting research into new and more effective tools, including a vaccine. Advocacy campaigns to raise awareness of the disease are a key component of the organization's activities. Indoor residual spraying (IRS) of the insecticide DDT on the walls and roofs of houses and domestic animal shelters and the distribution of insecticide-treated mosquito nets are important disease control activities of the Partnership.

The President's Malaria Initiative (PMI) is a 5-year initiative to control malaria in 15 target countries in Africa. Introduced by President George W. Bush on June 30, 2005, the government's program is a collaborative effort led by the U.S. Agency for International Development (USAID), in conjunction with the Centers for Disease Control and Prevention (CDC), the Department of State, the White House and others.

The PMI's goal is to cut malaria-related deaths by 50 percent in the target countries, focusing on children under 5 years of age and pregnant women. In the target countries, PMI coordinates with national malaria control program and international partners, including the Global Fund to Fight AIDS, Tuberculosis and Malaria; the World Bank Malaria Booster Program; the Roll Back Malaria Partnership; NGOs, including faith-based and community groups and the private sector. The PMI focuses on four key areas: indoor spraying of homes with insecticides, insecticide-treated mosquito nets, antimalarial drugs and treatment to prevent malaria in pregnant women.

Malaria No More is a grassroots movement formed in 2006 by leading NGOs to provide individuals and nonprofit organizations the opportunity to support a comprehensive approach in the fight against malaria. The organization's founding partners are the American Red Cross, UNICEF, the Global Business Coalition, Millennium Promise, The Global Fund, the United Way and the United Nations Foundation. The current primary initiative of Malaria No More is the distribution of long-lasting, insecticide-treated bed nets.

PATH is an international, nonprofit organization dedicated to enabling communities worldwide to break longstanding cycles of poor health. The PATH Malaria Vaccine Initiative, created in 1999 through a grant from the Bill & Melinda Gates Foundation is dedicated to accelerate the development of promising malaria vaccines and ensure their availability in the developing world.

We'll look at what you can do to keep from contracting malaria in the next section.

Save a Life and Donate

Every $10 you donate to the Malaria No More Fund will be used to buy a bed net and deliver it to a family in need.