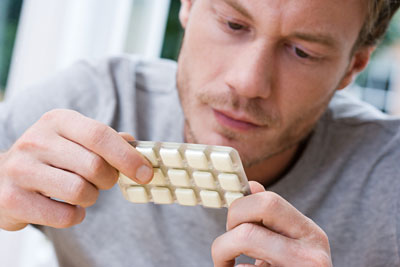 Nicotine gum may taste like butt -- but it sure beats cancer.
Image Source/Getty Images

Humans have been ingesting nicotine for thousands of years. It preceded Camel Joe's first gallop and was used well before she came a long way, baby. Nicotine was born in the Americas, and once the United States was colonized, it was cultivated and exported to Europe and around the world. As early as the 1600s, doctors suspected that smoking was dangerous to your health. It took quite a bit longer for these suspicions to be verified and even longer before the United States government took action with warning labels. Smokers that figured out on their own that it was dangerous were faced with irritability, sleep disturbances, increased appetite, major cravings and attention deficit.

Nicotine tricks your brain by stimulating the reward pathways with a shot of dopamine, the hormone that tells us that things like food and sex are pleasurable. It also increases activity in the cholinergic pathways of the brain. These pathways are concentrated in the brain stem and are believed to be involved in cognitive functions, like memory. An increase here makes you feel sharper and more focused. As if that's not enough, nicotine also increases your endorphin levels, the proteins that give you feelings of euphoria. At night when you aren't smoking, those pathways are shut down again and you wake craving cigarettes. One-third of all smokers have their first cigarette of the day within 10 minutes of waking up [source: FDA].

Naturally occurring nicotine levels found in tobacco already make smokers want to smoke. Then the Marlboro Man came along and tipped the scales more by souping-up the nicotine with the addition of sugar. When sugar is burned, it produces a chemical called acetaldehyde. Research studies on lab rats have shown that the little rodents will repeatedly self-administer shots of acetaldehyde much like they would nicotine.

Cigarette maker Phillip Morris conducted internal studies that showed that acetaldehyde and nicotine make for pretty good bedfellows. On average, lab rats self-administered 240 doses of acetaldehyde per day, compared to 90 doses of nicotine. When the two chemicals were combined and the rats could choose to administer the cocktail over the individual ingredients, they did so in spades -- with a whopping 400 doses per day [source: Ralof]. Nicotine replacement therapies like gum and patches may help to stave of the desire for nicotine, but they don't touch the acetaldehyde. Another interesting factoid -- when the body begins to break down alcohol, it produces acetaldehyde. So if you have a harder time not reaching for a smoke when you have a beer in your hand, it's no coincidence. Once the acetaldehyde is active in your system with that drink, you'll crave more in the form of a cigarette.

Another thing that makes it tough to stop smoking is something called free-base nicotine. This is a variation of the molecular structure of nicotine in which a hydrogen ion is missing. Why is that hydrogen ion special? Without it, nicotine vaporizes more easily into a gas, putting it on the express train to your lungs and from there, a quick ride to the brain. Any drug delivered to the brain more quickly is more addictive. Free-base nicotine basically does for smokers what crack does to cocaine users.

Here's where it gets interesting. Some brands of commercial cigarettes have been found to contain 10 to 20 times the amount of free-base nicotine than previously believed [source: Medical News Today]. Not only that, but the free-base nicotine is also packed more heavily toward the front of the cigarette, so those first few puffs really pack a wallop. Is it by some miracle that nicotine transforms into the free-base variety? Hardly. It's helped along by the addition of ammonia to your smoky treat.

Besides the fact that cigarette manufacturers have done everything in their power to make it as hard as possible to quit smoking, there are some other factors that go into it as well.