How long does it take smokers' lungs to regenerate?

Everyone knows by now that smoking is a leading cause of cancer, heart disease, and other life-threatening and chronic conditions. Smokers considering quitting, or those who have already quit, often believe that the damage inflicted on the lungs from smoking will not only cease, but will also reverse. According to experts, this is only partly true.

While some parts of the lungs may heal from the damage caused by smoking, much of the damage is permanent and will leave smokers (and quitters) at an increased risk for a range of health problems.

Smoking destroys cilia, which are tiny hairs in your lungs located in a thin layer of mucus in the upper airways and breathing tubes. The cilia's main function is to protect your lungs against infection. Dirt and pathogens, which are trapped by the layer of mucus, are pushed up and out of the lungs by the wave-like movements of the cilia. This makes the cilia the lungs' natural cleaning and repair system. This system in general, and the cilia in particular, are paralyzed and destroyed by the poisons in cigarette smoke. However, functioning cilia can begin regenerating within a few days of quitting smoking, and may completely return to their original functioning after an extended period; statistics show that people who have quit smoking reduce their risk of developing lung cancer to that of a person who has never smoked, within 10 to 15 years after quitting.

Because smoking permanently damages the alveoli (air sacs) in the lungs, those who have been smoking a long time, or who have smoked heavily (or both), are more likely to have developed chronic obstructive pulmonary diseases (COPD), such as chronic bronchitis or emphysema. While some of the inflammation caused by these conditions may be reversible, the scarring that smoking causes to the lining of the lungs is permanent. Continuing smoking, over time, lowers the chances of reversing any damage caused to the lungs as well as the risks for developing any related disease. 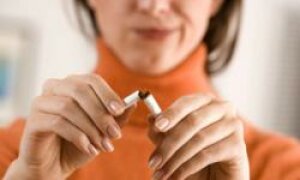