Is it really possible to be a social smoker?

Browse the article Is it really possible to be a social smoker? 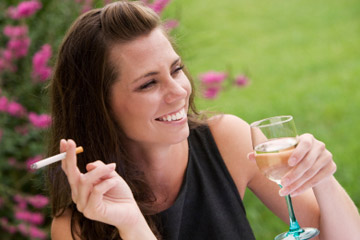 There's a rather succinct answer to the question we're considering. That answer is "yes." You can be a social smoker but it's unlikely to remain just a social habit for long. Plus, any amount of smoking is unhealthy. Although social smoking has increased 40 percent between 1998 and 2001, it's still a vague term [source: Social Smokers]. What exactly is a social smoker, or non-daily smoker? There are a few defining characteristics:

Up to 40 percent of U.S. adults who have smoked in the past month aren't considered nicotine dependent, according to the National Survey on Drug Use and Health [source: Health.com]. Consequently, there's a group of individuals that are physically able to smoke socially, just as there are people capable of drinking socially without becoming alcoholics. Yet habitual addiction is still possible. For instance, THC (the chemical in marijuana) is not chemically addictive, certainly not in the way nicotine is. Yet plenty of pot-smokers are habitually addicted to the ritual of getting high, alone or with friends [source: United Health Services]. Similarly, while a social smoker may not be chemically dependent on cigarettes, they may still crave them occasionally. So can it be considered an occasional indulgence, not unlike binging on sweets or getting a little drunk?

Binging on anything is never a good idea, in terms of health. There really can be too much of a good thing, and cigarettes are no exception. Despite the surgeon general's proclamation in 1964 that smoking is dangerous, currently 1 in 5 American adults still smokes. Each cigarette carries 7,000 chemicals that cause cellular damage in nearly every organ of the human body, so every social cigarette is still doing you harm. It can even bring on a sudden heart attack in extreme cases where the arteries are already clogged [source: CNN]. However, lower levels of smoking are, of course, better than higher usage levels. If a social smoker is otherwise healthy and only smokes a couple of times a week, the danger level is much lower than for a regular, pack-a-day smoker. So, while any smoking will increase the likelihood of health issues, social smoking is preferable to a regular habit.

Here's the problem: The chances of becoming merely a social smoker are very slim. Nicotine is highly addictive, so social smoking can easily lead into daily use. Furthermore, your genes could be working against you, making you a more likely candidate for chemical addiction. If your parents or siblings have addictive personalities, you're more susceptible to habitual smoking.

So, yes, you can be a social smoker. But keep in mind:

Finally, consider: If you can do without cigarettes -- you don't suffer from withdrawal and you could take them or leave them -- then why not quit altogether? Is the experience enjoyable enough that it outweighs the health risks? Most long-term or daily smokers will risk terrible withdrawal symptoms, weight gain and general misery as they try to quit. You're in a position to rid yourself of an unhealthy activity without the extremely challenge of doing so.

So, the next time someone asks if you really can be just a social smoker, you'll have the knowledge to clear the air.