How young is too young for children's spa treatments? 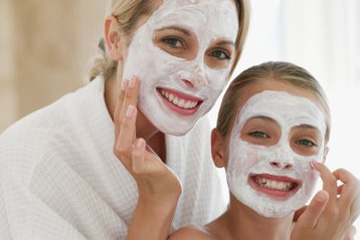 Getting Beautiful Skin Image Gallery Is your child too young for a facial or a manicure? Find out. See more pictures of getting beautiful skin.
TLC

"Childhood will soon be no place for children," says Sister Wolf in her Goddamit I’m Mad Blog. What got her all riled up this time? It was an article in the NY Post that talks about girls as young as 6 going for regular leg, armpit and eyebrow waxes. I didn’t get my eyebrows waxed until I was 31 --although if someone had told me earlier that my brows looked like two caterpillars living above my eyes, I might have started younger.

While pre-teen waxing might seem a bit creepy, remember that times are different now. Young girls regularly get manicures, pedicures and spa treatments long before they hit double digits. They wear makeup and carry cell phones. My mom gave my daughter her first manicure at 2 1/2 (I have to admit that although I was not pleased, the photos of her soaking her nails were beyond adorable); while my friend Eileen says she didn’t get her first manicure until she was in her 20s.

But, really, how young is too young for …

According to a study by C&R Research, 26% of 8- to 11-year-olds had their own cellphones in 2008, up from 7% in 2003. The writers of Iconowatch Blog say this trend is not necessarily being driven by chatty kids, but by their parents “as a way to keep kids safe using a tech-enabled leash.”

But in spite of the trend, many parents are holding out - at least until their kids start earning some money. My friend Mary Jo said that her 9-year-old really wants a cell phone (because everyone has one) but that she was firmly against it. “He’ll lose it,” she explained. “He can’t even hold on to a jacket.” She wants to wait until he’s about 12, and has the means to earn money so that he can pay for a replacement.

My co-worker Jen says her 7-year-old has been asking for one (because everyone has one), but she is saying “no way”. “When she's old enough to go places without me, walk to the store or something, I'll consider the kid-friendly phone that allows only three numbers, Mom, Dad, Grammy.” Instead, she gave her an old disconnected one to carry around, and look cool with.

But, although a phone can seem like an unnecessary extravagance, it can be a helpful tool as well. My sister got her son one at 11 and my sister-in-law held out until 13. In both cases, they got them so that their kids could stay in touch about rides and other needs.

While most of us probably didn’t get our first manicure until we were out of college (some not until we got an engagement ring and noticed our hands for the first time), but the low cost and prevalence of walk-in nail salons make it a different story. My sister has been taking her daughters for professional mani/pedis since they were toddlers (now almost 5 and 8). “Alexa loves getting a manicure followed by a chair massage,” she says of her 8-year-old.

My friend Kellie says that although she feels “a little guilty about it every time [she does] it,” she does take her 6-year old for pedicures on occasion. “While it's totally unnecessary for her, it's a really fun, relaxing and amusing thing to do with her,” she explains “We ‘read’ magazines together and choose the outfits we like best.  It's a great time for us to just focus on each other without any distractions.”

While none of my friends have taken their daughters to get waxed or paid for a spa treatment, according to the International Spa Association, more than half of the nearly 14,000 spas in the United States offer packages for families, teens or kids. This practice appears to be a lot more controversial than mani/pedis. Diane E. Levin, a professor of education, says in MSNBC.com “It worries me because it just tells them that happiness comes from how you look and from buying instead of learning how to do things.”

But others say if you focus on the health aspects of a spa treatment, and not the beauty part, it can be a positive experience. I guess that’s true of massages, but waxing your eyebrows, legs or other body parts - not so much.

How do you feel about your child wearing makeup, heels, getting her ears pierced, using a cell phone or iPod or some other adult-like activity or device? What age is appropriate?