How to Introduce Your Guy to Manscaping 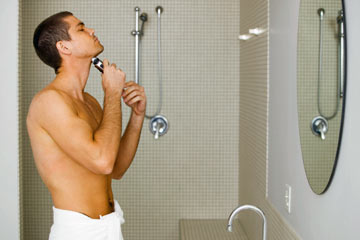 Body-hair removal isn't strictly for the ladies anymore. If your guy is looking a bit bushy, there are ways to get him to start "manscaping."
Brand X Pictures/Thinkstock

Facial hair can make a guy look distinguished. The same cannot be said of the back beard. If your man's ears are sprouting weeds or if he's a little too bushy below the belt, you may think it's high time he cleaned himself up. And perhaps it's high time you encourage him to.

"Manscaping" is a fairly new term. There was a time when body-hair removal was strictly for the ladies, but right now the hirsute look is decidedly out. Furry fellows are now expected to participate in bodily deforestation just as much as women. This might not be an easy concept for some guys to wrap their minds around, but it's a fact of life.

Once you've convinced your guy that manscaping is the way to go, the grooming plan could be a simple matter of a few swipes with a razor or a couple of tweezer plucks. But if you're dealing with multiple problem areas, a more involved plan of attack is essential. Here are some tips on how to get started with a reluctant manscaper.

Manscaping isn't limited to below the belt -- and it doesn't mean that he has to go totally bare. It's just about a general cleanup and keeping things trimmed and neat. If your guy is hesitant, start off with a couple of problem areas that are simple to shape up. Overgrown ear and nose hairs are easily banished with a handy-dandy ... wait for it ... ear- and nose-hair trimmer. Taming an unruly beard or mustache is another good starter project, as is plucking the dreaded unibrow.

Once your man's face is ship-shape and he's willing and mentally prepared to go further, you can move on to larger tasks. It might be daunting to tackle areas like the chest and back, but you also have more options at your disposal. You could help him shave an overgrown back (after you've done a pass with an electric groomer, of course), or he could try a depilatory cream or wax. Unless he's going for the underwear-model look, his chest hair might be better with a trim rather than a full removal.

He might not be so eager to take a razor to previously ungroomed territory -- not to mention the potential blow to his ego -- but with some strategic female persuasion maybe he'll dare to go bare (or at least make himself a little more presentable).

When it comes to the nether regions, we don't have to remind you that caution is key. Waxing is OK for some areas, but in others he'll probably want to use small fingernail or grooming scissors ... or just leave well enough alone.

And remember, manscaping doesn't have to be an entirely DIY affair. Waxing, for one, might be better left to a professional, especially if your guy is a hair-removal virgin. And remind your man that this isn't a one-time job -- maintenance is just as important as the initial clear-cutting. Have him invest in a pair of tweezers, a good-quality electric groomer and whatever other tools he needs to keep himself looking manicured.

For more grooming tips, take a look at the links on the next page.

Why Lead Is Becoming a Problem in the U.S. Water Supply
The Benefits of Folic Acid
Should your fitness regimen change as you get older?