Why are breasts different sizes? 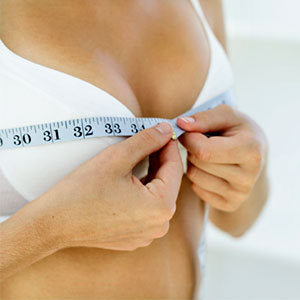 The average bustline has grown since the 1980s.
Stockbyte/Getty Images

Each year, British lingerie retailer Debenhams surveys its female customers to keep tabs on the kinds of knickers women are wearing. In 2008, for instance, the data deemed the pushup bra as women's most beloved "fashion invention" of all time, but according to the survey results published in 2012, modern-day breasts might not need much additional augmentation [source: UPI]. Among Debenhams' patrons at least, the most popular bra size had ballooned since 2010 from a 34B to a 34DD [source: Adams].

A survey from a single store chain doesn't constitute a bona fide busty pattern, but other unrelated statistics also indicate that Western breasts have become more bountiful in recent years -- and not because of an uptick in cosmetic surgeries. In 1983, Playtex lingerie manufacturers reported their best-selling bra had grown from a 34B to a 36B, and another metric now pegs the average American cup size at a 36C [source: Adams and Redbook]. This population-wide upswing can be attributed to a number of factors, such as women's expanding waistlines, great interest in properly fitting undergarments and a lack of standardized sizing among lingerie brands [source: Holson].

When it comes to individual pairs of breasts, the size-related variables continue. Weight changes, medications, pregnancy and menstruation can all incite fluctuations, but breast size is largely determined by seven genetic markers [source: Erikkson et al]. Bras therefore come in an alphabet of sizes and styles because every woman inherits a unique set of breast-related DNA from her parents' genes. And even though breasts are typically considered identical pairs, size differences exist not only from woman to woman but also, quite often, from breast to breast. During female puberty, estrogen stimulates thelarche, or initial breast development; budding breasts, however, don't always receive identical doses of the hormone, which means one side might grow faster than the other [source: Hirsch]. Early breast asymmetry may even out in adulthood, but at least 25 percent of women have slightly lopsided busts [source: Peterson].

As researchers discover more details about the genes that call the shots on breast sizes, they're also starting to look into whether asymmetry has long-term implications beyond having a harder time shopping for the appropriate bra cup.

Breast Cancer: Everything You Need to Know
Free Knitted Knockers Are a Boon for Breast Cancer Survivors
Do underwire bras give you cancer?