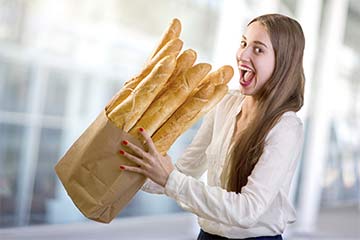 Can you be addicted to wheat?
RossHelen/iStock/Thinkstock

Wheat has had a rough time of it lately. Consumption is down, the number of people on gluten-free diets has skyrocketed (so much that the backlash has already started), and everywhere you turn it seems someone is warning of the hidden dangers of wheat. But what, exactly, is the case against wheat? Yes, it's loaded with carbs, and we probably eat too much of it, but is wheat actually toxic?

Well, it depends whom you ask. Without a doubt, wheat is toxic to people with celiac disease. When you have celiac disease, your immune system produces antibodies that attack the intestinal lining when you've eaten anything containing gluten. Then your damaged intestines have trouble absorbing many nutrients, especially calcium and iron, causing your health to go down the tubes. It's certainly cause for concern that cases of celiac disease have doubled in the past 20 years or so, but it still affects only 1 percent of the population [source: Aubrey]. People can also be allergic to wheat and gluten, just as they can to any other food.

So what about the rest of us? According to the National Foundation for Celiac Awareness, about 18 million people in the United States have non-celiac gluten sensitivity, a condition in which gluten consumption can cause any number of issues, from acid reflux and abdominal bloating to asthma and irritable bowel syndrome. But there's no definitive test other than an elimination diet, so there is some disagreement about whether it's a real disorder. Regardless, there are millions out there — self-diagnosed and otherwise — who'd say that erasing wheat from their diets has relieved their symptoms.

The loudest voice in the anti-wheat movement belongs to William Davis, author of the best-selling book "Wheat Belly." According to Davis, wheat is toxic to everyone, not just people with celiac disease and gluten sensitivity or allergies. The main reason for this, he says, is the industrial modernization of wheat. Starting in the 1950s, scientists started cross-breeding wheat to make it stronger, hardier and better-growing. But Davis says they also changed the gluten protein and introduced new compounds that made wheat nearly impossible to digest. Gliadin, he says, has an opiate-like effect that makes wheat addictive. Davis' list of toxic wheat properties is exhaustive, and his conclusion is that our only recourse is to completely eliminate it from our diets.

But there are members of the scientific community who cry foul at Davis' theories. An article in the University of California's Wellness Letter points to the fact that obesity levels are still rising even though consumption has decreased, so wheat can't be the only villain. The authors say there's not enough clinical evidence to make the case against modern wheat, either. It's true that we eat too much refined wheat products, they say, but unrefined wheat is an important part of our diet — and many of those who've self-diagnosed a gluten sensitivity are probably restricting their diets unnecessarily.

Only time — and more research — will tell if the gluten-free craze is scientifically legitimate or just the latest in a long line of debunked diets du jour. And rest assured there's lots of research happening on this hot-button issue right now. But until then, remember that "everything in moderation" is never a bad policy.

Is American wheat the cause of gluten sensitivity?
Research Confirms Wheat Sensitivity That's Neither Celiac nor Allergic
How Elimination Diets Work

Is weight gain associated with a gluten allergy?
What are some chicken allergy symptoms?
What can you substitute for eggs if you have an egg allergy?