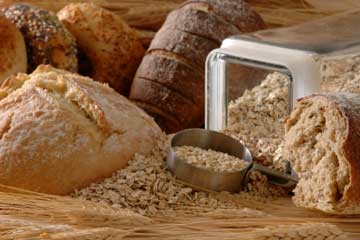 Whole grains include all three parts of the grain kernel: bran, germ, and endosperm. The bran is the outer covering that protects the seed. It contains fiber, B vitamins, and minerals. The germ contains the embryo, which, if fertilized, will sprout into a new plant; it contains B vitamins, vitamin E, minerals, and some protein. Both the germ and the bran contain many phytonutrients -- health-promoting plant compounds -- including polyphenols, phytoestrogens, and antioxidants. The endosperm is the largest part of the kernel, which supplies energy to the growing seedling. It contains carbohydrate, protein, and small amounts of vitamins and minerals. When grains are refined, the bran and some of the germ are removed, leaving the starchy endosperm. Whole grains -- such as whole wheat, whole oats and oatmeal, whole rye, whole-grain barley, brown rice, and popcorn -- provide health benefits that are not found with refined grains, and they protect against heart disease, obesity, diabetes, and cancer.

The way in which whole grains protect the heart is not fully understood; the fiber in whole grains may be responsible for protecting the heart. Or other compounds, such as phytoestrogens and antioxidants, may be beneficial in lowering cholesterol and the risk of heart disease. Diets rich in whole grains have been linked to a lower risk of metabolic syndrome and decreased insulin resistance. The Food and Drug Administration allows manufacturers of food products that contain 51 percent or more whole grains to claim that diets rich in whole-grain and other plant foods and low in total fat, saturated fat, and cholesterol may help reduce the risk of heart disease and certain cancers. The Dietary Guidelines for Americans 2005 recommends an intake of at least 3 ounces of whole grains every day, but most Americans only eat about one serving a day.