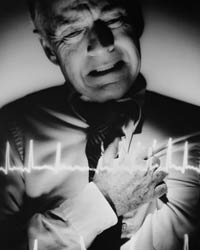 When it comes to the battle of the sexes, victory favors women through simple attrition. Men are, on average, 66 years old when they have thei­r first heart attack, and nearly 50 percent of men who have a heart attack by the age of 65 will die by the time they're 73 [source: CDC]. More men in America die from heart disease than from any other single cause, and it was responsible for 28 percent of all American men's deaths in 2003 [source: Mayo].

Women tend to develop coronary heart disease about 10 years later than men do, and for serious events such as heart attack or sudden death, there's a 20-year lag [source: AHA]. Although women on average outlive men (females born in 2005 can expect to live a little more than five years longer than a male born in 2005 [source: NVSR]), post-menopausal women are at equal risk of heart disease despite its later onset, and it claims nearly equal numbers of men and women every year [source: Harvard]. In some ways, women may put themselves at greater risk by overestimating the risk of heart disease for men, wrongly believing they're off the hook. Fortunately, there's enough time to learn the facts --women generally don't experience heart attack until age 70, but heart disease begins taking a toll years before that [source: Harvard].