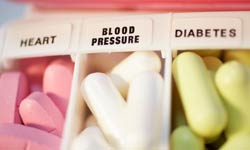 Diabetes and heart disease are a little too close for comfort.
Plush Studios/Getty Images

Diabetes is an inability to self-regulate blood-glucose levels. It's also a contributing cause of heart disease. Diabetics are twice as likely as nondiabetics to suffer from heart disease [source: American Diabetes Association]. Worse still, they're five times more likely to have heart attacks [source: Haynes].

Diabetes affects many parts of the body, especially the kidneys. As systems lose full function, the heart is forced to work harder and carry even more of a load. The inner lining of the artery is already nicked up by products in the bloodstream such as sugars and lipids, and the excess sugars in a diabetic's blood cause even greater wear and tear. It doesn't help when the sugary blood is being sent through the body with greater force from high blood pressure, which diabetics are also more likely to have.

Type-2 diabetics (people with a form of diabetes that presents itself in adulthood) are treated statistically as if they've already had one heart attack -- as a reflection of the damage diabetes causes the heart. Type-2 diabetics tend to have poor exercise and dietary habits, putting greater strain on their hearts even before the onset of diabetes. Diabetics have a 65 percent chance of one day dying from heart disease or stroke, but they can fight these odds by closely monitoring their blood glucose levels, not smoking, exercising, lowering their cholesterol levels and controlling their blood pressure [source: Mayo].

Stick around long enough, and you'll learn the hard way about the heart disease factor we'll talk about in the next section.