Why is exercise important for heart health? 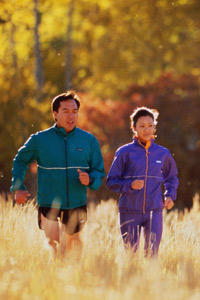 At any given time, 13 million Americans are suffering from coronary artery disease­ (CAD), the most common cause of heart attacks [source: WebMD]. In people with CAD, a combination of high cholesterol levels and other fats in the blood collects on the inner lining of the heart's arteries, eventually forming a thick plaque that attracts clotting agents in the blood. Once a clot forms, it's very difficult for blood to get to the heart. That's when a heart attack occurs -- cells in the oxygen-depleted heart start to die, and the heart falters.

For some people, heart disease is out of their control, a result of genetics or diabetes; but more often than not, it could have been prevented. Even after coronary artery disease has taken hold, preventive measures can still curtail its progression to heart attack or debilitating illness. Some of the best preventive measures include eating a low-fat, high-fiber diet and getting regular exercise.

It's obvious why eating less fat would decrease the chances of developing clogged arteries. At its simplest, if there's less fat in the body, there's less fat available to build up on artery walls. The heart-healthy effects of exercise are perhaps less intuitive, but they're just as pronounced. Physical activity has a tremendous effect on the heart: Research has shown that overweight people who exercise have a lower risk of heart disease than thin people who don't [source: Health]. Thirty minutes of moderate-to-high exertion activities -- such as running or playing basketball -- at least three times a week can decrease your risk of developing heart disease by at least 20 percent [source: WebMD].

In this article, we'll look at the effects exercise have on the heart and how that relates to the risk for heart disease. The connection is more direct than you may think.