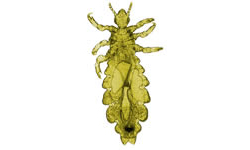 Out of the dozens of parasites that can make our lives miserable, a few hold a special place in our imaginations. These are the creepy crawlies that latch onto — or burrow into — our skin. Perhaps it's because these creatures pierce us that makes them seem more gruesome than other parasites.

The parasites we've uncovered for this article all share something in common — they breed and lay eggs on or in our skin. In some areas of the world, these pests have been all but eradicated. But in other regions, they present a very real threat to human health and survival.

You might notice some well-known parasites didn't make our list. For example, the guinea worm isn't here, despite the fact that it travels through the flesh, eventually exiting out of an extremity. That's because the worm doesn't actually breed in the skin, even though it does pierce through.

Let's meet the various critters that make their homes — and raise their families — on or in our skin. 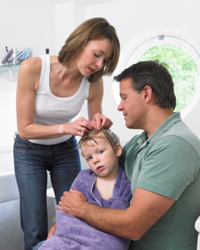 Lice are hard to spot, but their eggs aren't.
BananaStock/BananaStock/Thinkstock

The common louse is a real pest. There are three broad categories of lice that plague humans — head, body and pubic lice. Lice feed by biting and drinking the blood of their hosts. Body lice don't live on the skin itself — they inhabit clothing and only move to the skin to feed. But head and pubic lice live directly on the skin.

The louse can't fly or jump — it can only crawl. When a louse lays eggs, it does so at the base of a shaft of hair. The eggs — or nits — are oval and usually white, yellow or a color similar to that of the hair to which they're attached. Larvae hatch from the eggs after a few days. A little more than a week later, the larvae have matured into adults capable of reproducing.

There are several treatments for lice. Most of these treatments are in the form of medicated shampoos. Human lice are transferred by close contact with infected humans — in other words, you won't catch lice from animals. 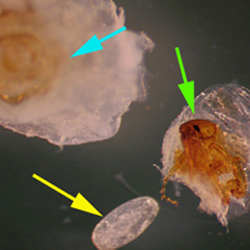 This image from the CDC shows the chigoe flea in three different stages of development.
CDC Photo

The chigoe flea is known by many names, including the jigger flea and the sand flea. Regardless of what you call them, the parasite latches onto its host's skin to feed. The flea breathes, defecates and lays eggs through its hindmost pair of legs — the only part of the flea that remains exposed to air once it latches on.

Female jigger fleas penetrate into the skin of the host and lay hundreds of eggs. This egg-laying period can last up to three weeks. Then, the females die and eventually fall off the host. Once the eggs hatch, the fleas bite their host and continue the cycle. The nodules that form around the fleas may also let in other substances, giving rise to the risk of infection. An infection of chigoe fleas is called tungiasis.

The chigoe is found mainly in South American and African regions. It normally attacks between the toes of hosts but can latch onto other parts of the body as well. The fleas can also cause necrosis — tissue death — that often must be removed with surgical tools. 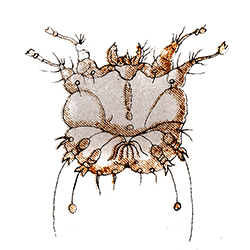 A microscopic creature called the scabies mite can be a big problem. These tiny mites transfer from person to person through skin contact. Scabies are especially troublesome within a household or any community with a dense population. Prisons, nursing homes and childcare facilities can be vulnerable to scabies outbreaks. What's worse, the first time someone is infected with scabies, they may have no symptoms for up to two months, but will still be contagious during that time.

The scabies mite burrows into the skin and lives out its life cycle there. This includes laying eggs. One variety called Norwegian, or crusted, scabies is particularly severe. In this form, the victims form crusts of skin. These crusts are home to millions of mites and eggs. The victims are also much more contagious than people infested with less severe types of scabies.

Because one of the symptoms of a scabies infestation is itching, people with scabies run the risk of creating sores on their skin from scratching. These sores could later become infected, exacerbating the victim's condition.

Doctors treat scabies infestations with scabicides — poisons designed to kill the mites and eggs. The most common version comes in the form of a lotion or cream. 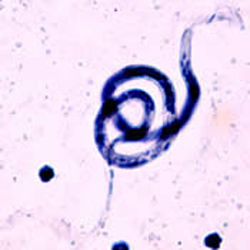 The microflaria of Brugia malay matures into a parasite that causes elephantiasis.
CDC Photos; DPDx

This is a bit of a cheat — it's not an insect and it lives in the bloodstream. But the filarial worm makes its way into a human host through an insect bite piercing the skin.

The life cycle of a filarial worm is interesting. A biting insect, such as a mosquito, ingests blood from an infected host. Filarial larvae enter the insects as they feed. The larvae develop in the gut of the insect. When a larva matures, it moves to the insect's head. When the insect bites another victim, the larvae travel down through the insect's mouth and into the victim's bloodstream.

Once in the bloodstream, the larvae mature into a worm that can produce more larvae capable of infecting biting insects, continuing the cycle.

There are several types of filarial worms, each affecting humans in different ways. Lymphatic filarial worms can cause elephantiasis — extreme swelling of the limbs and other body parts. 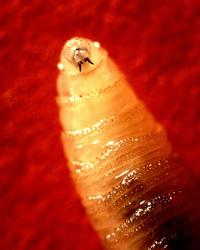 The screwworm larvae can burrow into wounds on animals and humans alike.
John Kucharski/USDA

The Cochliomyia hominivorax — or screwworm — is a troublesome parasite. The adult form of the insect is a fly that looks similar to a common housefly. The adult female fly seeks out hosts that have open wounds. The fly will lay hundreds of eggs along the edge of the wound. After several hours, the eggs hatch and larvae emerge.

The larvae have a series of ridges along their bodies, which is where the screwworm gets its name. The larvae burrow into the flesh through the wound. There, they feast upon the flesh of the host for several days before emerging to fall to the ground. Then the larvae will burrow into the ground and pupate. It can take between a week and two months for the insects to reach adulthood.

Through careful control efforts, the USDA has all but eradicated the screwworm in North America. The eradication program was simple, but effective — knowing these flies only mate once, the USDA used radiation to sterilize male flies before releasing them to the wild. The sterile males would mate with females. As a result, the female flies would only lay unsterilized eggs. Within a few generations, the flies were eradicated. Now only incoming animals or humans already infected with the screwworm contribute to any infestation.

You can still encounter screwworms in other parts of the world such as Central America and the Caribbean.

That wraps up our list of parasites that use the skin to breed. To learn more, follow the links on the next page.