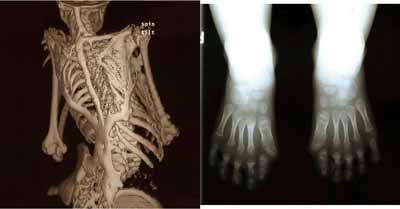 You might wonder if FOP bone can be removed. Well yes, it can -- but that actually makes things worse. The bone will simply grow back, possibly with even more bone than before. Any kind of trauma to the body can cause a flare-up, resulting in new bone. Even injections into the muscle (like for vaccines or local anesthesia) can cause flare-ups, so you can see why a full operation might spark a traumatic reaction.

There isn't any real proven treatment for FOP, so doctors use medications to treat the symptoms of FOP. Reports are anecdotal -- they rely on the unscientific observations of people using the medications, rather than a double-blind clinical study. There aren't many people with FOP, so it's hard to get a large enough sample to conduct a study that could produce significant results. Eventually, it should be possible to design new medications to block the overactive receptor that triggers bone formation in FOP.

Some of the medicines that have been reported to be helpful are:

For an adult with FOP, trying to stay as independent as possible can be a challenge. People with financial means or good insurance coverage could modify their homes to be wheelchair-friendly, making everything easier. For some people, it might be necessary to hire a caregiver.

In the next section, we'll look at some other rare bone diseases.

The International Fibrodysplasia Ossificans Progressive Association (IFOPA) is a nonprofit organization for families dealing with FOP. Its Web site has some great materials for people with FOP, relatives of friends of persons diagnosed with FOP, and people interested in FOP.